Gorilla Breaks Zoo Enclosure, And For A Moment We See Ourselves

"There is more meaning and mutual understanding in exchanging a glance with a gorilla than with any other animal I know. Their sight, their hearing, their sense of smell are so similar to ours that they see the world in much the same way as we do." - Sir David Attenborough

People who have had the chance to see gorillas living free in the wild have described the experience with a sense of awe and humility. Zoos have tried to replicate that scenario by presenting our primate cousins in captivity, but behind walls the distance between us only widens. 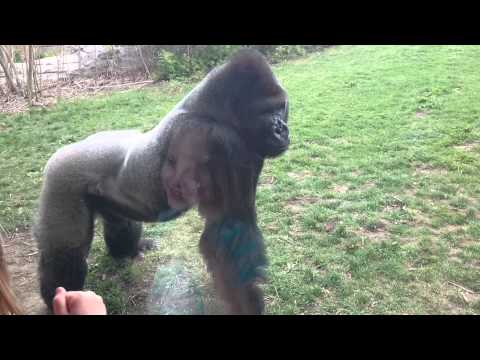 But the most shocking moment of the footage isn't the gorilla's futile charge - it's the split second when, in the polished glass wall, we see our own reflection. And there may be no more important image for us to confront.

Gorillas - whether it be those trapped as living exhibits in captivity behind glass, or those in the wild on the front line of extinction - are no strangers to the less compassionate side of humanity.

Sadly, all gorilla species are considered endangered under the International Union for Conservation of Nature, as their numbers dwindle due to encroachment into their habitat and from the pervasive threat posed by poaching. But in the wild, these intelligent animals have shown remarkable perseverance against human perils, with some even learning to dismantle poachers' snares.

It's not surprising then that this gorilla, fated for lifelong confinement, would be similarly combative against those straits, even if his efforts are ultimately in vain.