He's come a long way since his mother tried to kill him.

In fact, to say Zhuang Zhuang had an inauspicious start in life would be generous. The moment this little fella came into the world at a Chinese zoo in 2013, he was greeted with rejection.

First his mother made every effort to stomp him to death, a nightmare scenario that tends to stick with children for a long time.

And she tried to kill him again.

Faced with a mother's rejection (compounded somewhat by her fervent desire to kill him), Zhuang Zhuang did the only thing anyone could do.

He cried. For five straight hours, the tiny calf cried. Images of those tears were broadcast around the world, so salty and sad we could almost taste them.

Zhuang Zhuang's tears, however, appeared very, very much in the human sense.

It should have been a celebrated birth, a not-very-common new arrival for animals in captivity.

Instead, crying Zhuang Zhuang became a poster child for rejection.

We may never know.

But, as you can see on this Facebook page dedicated to the little dandy, he appears to have sorted them out.

Zhuang Zhuang was later adopted by a keeper at the Shendiaoshan wild animal reserve in Rong-cheng, according to Metro UK.

"They have made a good bond," a spokesman for the park told the newspaper. "We don't know why the mother turned on her calf but we couldn't take a chance."

And a belated welcome to the world. 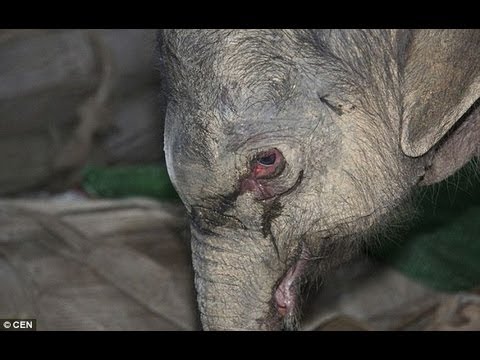