Kidnapped Mother Pangolin Returns To The Wild — But Without Her Baby

A mother pangolin who was confiscated from illegal wildlife traders in June has finally returned to the wild - but a part of her is missing.

She and her baby were discovered in a box, curled up around each other, which is what pangolins do when they're afraid.

The two pangolins were rescued when three men were arrested for trying to sell them. They were brought to the Game Rangers International (GRI) Wildlife Vet Program, a rehabilitation center in Zambia, with the help of the David Shepherd Wildlife Foundation (DSWF).

"From the poor condition of the mother and baby, it is thought that they had been in captivity for over two weeks," Vicky Flynn, a representative for DSWF, told The Dodo just after their rescue.

But the stress of the ordeal proved too much for the baby pangolin, who passed away while in the care of rescuers.

"Sadly, it seems that the mother's traumatic experience may have affected her ability to lactate, causing the condition of the baby to deteriorate," Sally Case, CEO of DSWF, explained. "The baby had struggled to keep pace with his mother during feeding expeditions and unfortunately passed away leaving the mother to return to the wild alone."

Pangolins are the most heavily trafficked animal in the world. A high international demand for their meat and scales in Asian markets leads to massive illegal hunting and kidnapping. An estimated one million pangolins were traded illegally in the last decade, and demand keeps growing: Between 2011 and 2013, an estimated 116,990 to 233,980 pangolins were killed.

The DSWF is funding a new Pangolin Protection Program to help pangolins through rescue and rehabilitation, and educate the public about their plight.

Learn how you can help, here.

Watch the mother pangolin return to the wild below: 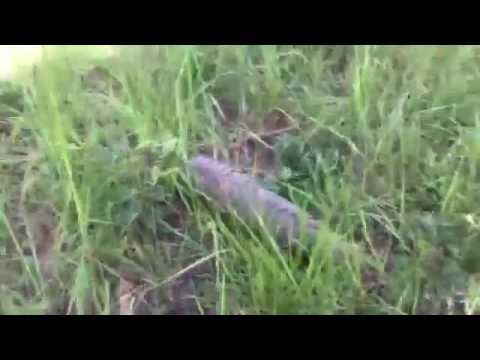