Would-Be Rhino Killer: "I Deeply Care About All Of The Inhabitants Of This Planet"

Corey Knowlton, the man many speculated was the winner of a controversial auction to shoot an endangered black rhino in Namibia, has finally broken his silence and confirmed that the $350,000 winning bid came from him. In a statement on his Facebook page, Knowlton says:

Thank you all for your comments about conservation and the current situation regarding the black rhino. I am considering all sides and concerns involved in this unique situation. Please don't rush to judgment with emotionally driven criticism towards individuals on either sides of this issue. I deeply care about all of the inhabitants of this planet and I am looking forward to more educated discussion regarding the ongoing conservation effort for the black rhino.

CultureMap Dallas has managed to get a hold of a video of the rhino auction: 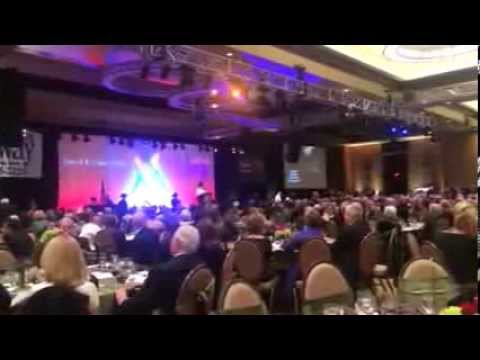 Knowlton is a consultant for a hunting outfit called Hunting Consortium Ltd and has appeared on several TV hunting shows. Some commenters have suggested that, because Knowlton is not the typical mega-millionaire that makes bids like these, he could be bidding on behalf of another person who wishes to remain anonymous -- though that is entirely unconfirmed.

The Dallas Safari Club has been making headlines ever since it announced the controversial auction last year. The DSC claims it will use the money for conservation -- it'll kill this rhino to save others, the argument goes -- and says that the animal chosen to be the target is an older, non-breeding bull male that has been preventing other younger males in the herd from breeding with females.

But a loud chorus of critics disagree, saying that it sends the wrong message and sets the wrong precedent. Jeff Flocken, North American director for the International Fund for Animal Welfare, told National Geographic, "taking a highly endangered species, and generating a furor to kill them in the name of conservation is not going to do anything to help them in the long run."

Protesters rallied outside the convention center last Saturday where the auction was held, including one Atlanta couple with their two children, both of whom participated in the protest as well.

"We heard what the Dallas Safari Club was doing and we thought it was just wrong that they were auctioning off to kill a black rhino and we really got upset that they were thinking this," 12-year-old Carter Ries told CBS News. His father, Jim Ries, added, "There's less than 5,000 black rhinos left on the planet, and if our kids ever want to see a rhino left in the wild, we can't be pulling the trigger on every one we say is too old to breed."

Scientists say that there are about 5,055 black rhinoceroses left in the world -- a decline of 96 percent over the past century.

Knowlton's Facebook page has a remarkable trove of photos, below, of him with animals he's hunted in the past. (Warning: Some may find these images disturbing.)

ACTION ALERT: Zoos and Aquariums
Hundreds of millions of people visit zoos every year, despite increasing public anxiety about animals in captivity. If you want to make sure you're at least visiting a zoo that makes efforts to be humane, make sure it is on the list of U.S. facilities accredited by the Association of Zoos and Aquariums; internationally accredited facilities are listed here by the World Association of Zoos and Aquariums. If you want to see whether a facility has any recent USDA violations, you can search this database. You can report a zoo or aquarium to the USDA here. And if you want to become active against having animals in captivity, Peta and Born Free USA offer places to start.