Cows Stop Everything Just To Listen To Classical Music

This was one experiment that went surprisingly well.

In 2014, musicians from the Cleveland Orchestra visited the Woodstock Farm Sanctuary with a special mission in mind: to test whether or not rescued farm animals would appreciate the sweet sounds of professionally played instruments - a violin, guitar and oboe.

Would the cows actually love the music? Hate it? Ignore it?

As soon as a violinist started playing, one of the sanctuary's shyer cows, Maybelle, began to walk toward the woman.

Then she stood still, listening carefully.

Kayli and Mike Jr. then joined Maybelle, proving to be a fans of the oboe ...

... although one remark made in the video claimed that Mike is "more of a punk rock kind of cow."

Even little Maribeth stopped by to see what all the commotion was, only to stick around as well ...

... and so the "Bovine Music Appreciation Society" was born.

This particular scenario seems to add a bit more of legitimacy to a 2001 study from the U.K.'s University of Leicester - according to the study, cows are big fans of slow jams (but not so much The Beatles, weirdly enough). The research was done in the context of seeing if relaxing music helped dairy cows produce more milk, but the results were inconclusive, due to the fact that reproducing such a large-scale study to confirm the findings is no walk in the park, NPR reported.

In any case, we'd much rather see cows happily enjoying Bach within the safe confines of a good sanctuary.

See just how much these cows love their classical music for yourself: 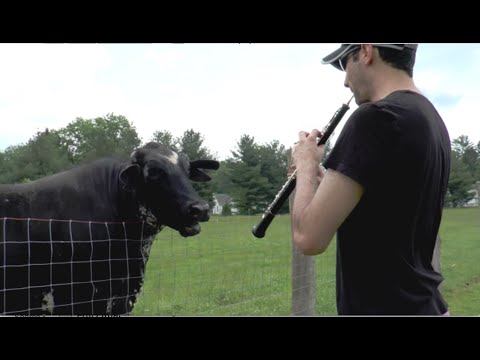 Check out this story about one special little goat who also lives at Woodstock - and how much he loves his stylish coat.