Woman Gives Water To Pigs Going To Slaughter ... And Gets Punished

It's one compelling video: A woman in Toronto gives thirsty pigs water while they're being transported to slaughter.

And for her actions, she's facing criminal charges.

Anita Krajnc is the founder of Toronto Pig Save, a vegan, non-violence-based organization that holds weekly vigils for farm animals on their way to regional slaughterhouses.

In June, Krajnc reportedly approached a stationary Van Boekel Hog Farm transport truck in Burlington, Canada that was filled with pigs, and told a fellow activist: "Can you give this guy some water?"

But the truck driver said no. The activists gave the pigs some water anyway. And the driver shouted: "You know what, these are not humans, you dumb frickin' broad."

Both the driver and Kranjc recorded the incident - which you can view above - and it is just one of many provocative videos that Toronto Pig Save has on its website and Facebook page. Each video is a lens into the conditions that pigs endure on their way to slaughter. 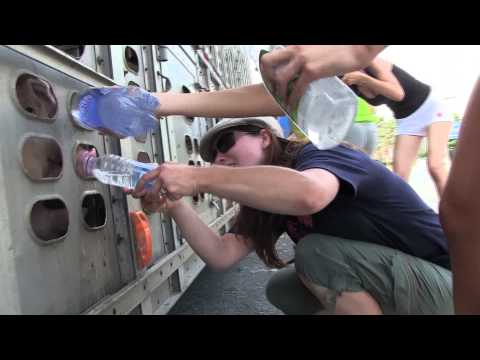 This video is called "Last Sip of Water Before Dying."

The Canadian Food Inspection Agency is charged with overseeing the transport and welfare of pigs in Canada. On its site, CFIA refers to the National Farm Animal Care Council for the codes of practice for transporting pigs:

Bob Comis is a former pig farmer turned vegan who owns the ethically based In Line Farms in New York. His transformation has been documented in The Dodo and Comis is the subject of a forthcoming documentary, "The Last Pig."

Comis reviewed the video of Krajnc's efforts for The Dodo and wrote this about the conditions of the pigs in the trucks, which he calls absolutely deplorable:

Transporting pigs presents significant welfare concerns, especially in the heat of summer. Pigs do not sweat, and they do not shed heat to any significant degree when they pant as dogs do. Nevertheless, pigs do pant, but only when severely heat stressed. The pigs whose faces we are able to see clearly in the video are all panting. It is safe to assume that the entire trailer load of pigs is suffering similarly from severe heat stress.

Comis also says that based on his experience as a farmer, he would advocate for an even more significant method to alleviate the pigs' suffering.

"Anyone hoping to offer some degree of relief to suffering, severely heat stressed pigs confined in a trailer should show up with the largest Super Soaker water gun they can find full of lukewarm water and spray it all over the pigs bodies (depending on the level of heat stress, using cold water instead of warm could send the pigs into shock)," he said. "While there is no question the pigs are thirsty, their severe physical and emotional stress is from being dangerously overheated.

According to Krajnc's statement on Facebook, her next court date is November 4. "I'm being charged with criminal mischief (Mischief under $5000, Section 430(b) Criminal Code) – interference with the use, enjoyment of and operation of property."

Toronto Pig Save began in 2010 as a grassroots effort. The organization says there are now a number of "Saves" across Canada, Australia (Melbourne Pig Save), and in the U.S., including North Carolina Pig Save. On its site, the group writes: "It's hard to believe that humanity supports this reality."

Krajnc told The Dodo that her group is working to combat what she calls "the animal exploitation industry."

"Bearing witness helps make the 60 billion figure tangible and real by highlighting the individuality of each animal," she said, referring to the numbers of animals killed each year around the world.

Krajnc says when she looks inside the trucks, "the pigs, cows and chickens look at us with pleading, sad and terrified eyes, asking us to help save them."
If you would like to donate to Toronto Pig Save, please go here.

Krajnc says when she looks inside the trucks, "the pigs, cows and chickens look at us with pleading, sad and terrified eyes, asking us to help save them."

If you would like to donate to Toronto Pig Save, please go here.