Why This Kitten Gobbles Like A Turkey While Eating

It's fairly common for felines to make other noises besides the typical "meow," especially when they're young and while they're eating because felines are highly competitive when it comes to resources (specifically food). The sound they emit is a low growl meant to ward off any possible competitor. According to the Ohio State University College of Veterinary Medicine, there might not even be an apparent threat to a cat's access to resources -- but if the cat perceives a change in how much control it might have over the outside environment, he or she might become more outwardly (and vocally) assertive. What many people perceive as an adorable noise is actually a sign of mild aggression.

But Dilara Goksel Parry, animal behavior consultant at Feline Minds, believes that Turkey might actually be gobbling as a sign of her inner conflict, as there are no other cats around to cause her to become vocally assertive. She says Turkey clearly appears tense, observing that she doesn't move her whole body forward and lean close to the can, as most kittens would. "She is likely in a slightly conflicted state," Parry said. "It's like she's thinking, ‘I want to eat, but I am a little scared -- I don't want anyone to take this food away!'"

Hopefully, Turkey will be able to eat with a little more ease in the future. The shelter announced this morning that the kitten has been adopted, and she'll be headed off to her new home sometime in the next week. Meanwhile, here's another adorable kitten "growl," which Parry recommends. 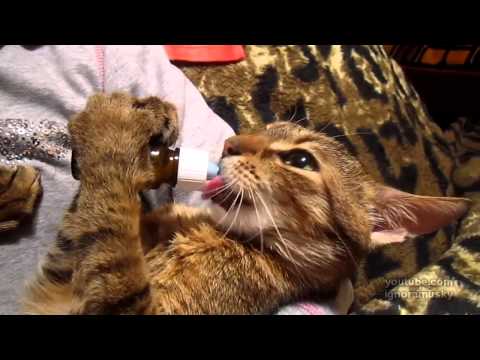