Why This Fish Likes To Be Petted

A curious video showing a fish getting "pet" by a man is making the internet rounds today, and it's just as strange as you'd imagine.

The fish, a Midas Cichlid, appears to approach the person's hands looking for a scratch -- something like a puppy would -- and even returns for more. But what's really going on here? The Dodo spoke to author and animal ethologist Jonathan Balcombe, Department Chair for Animal Studies with Humane Society University, to get to the bottom of this.

According to Balcombe, some fish (though certainly not all) do actually enjoy being touched by humans. "It is a basic characteristic of animal behavior that animals will approach desirable things and retreat from undesirable ones," he said, adding that the fish "appears to like the touch because s/he swims back to the hand repeatedly."

Balcombe notes that touch is a powerful de-stressor for animals -- and fishes are no exception to this phenomenon. Other examples include groupers, who are well-known for approaching a trusted human to be stroked and cleaner-fish, who gently stroke their client fish with their fins. One study involving surgeonfish found that fish who had been subjected to stress spent more time in contact with a mechanized wand that stroked their bodies than unstressed fish did.

"So, my guess is that the fish in your video is tame and experienced with being touched by humans," Balcombe said. "Without knowing the specifics of relationship between the fish and the handler in this video, we can only speculate on whether we're witnessing a known relationship based on trust. I would guess so, as fishes routinely recognize other individual fishes, and there is anecdotal evidence that they also learn to recognize familiar humans."

We certainly don't recommend doing this with all fish -- many fish will get spooked or can be hurt by overstimulation or germs on peoples' hands. Luckily, though, there are videos like this one to let you experience petting a fish, without actually petting a fish: 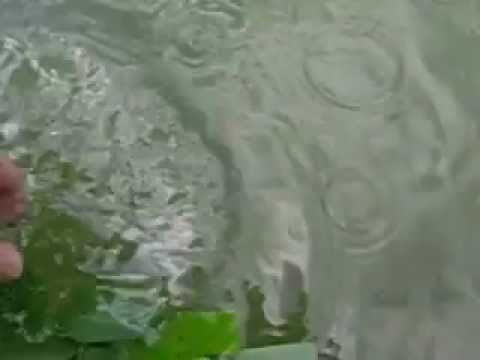