A lot of my non-orca friends have been remarking about how frequently they have been seeing the SeaWorld counteroffensive to the #BlackfishEffect on their TV sets these days, especially on sports and news programs.

What they mostly remark on, in fact, is just how utterly insincere the people they are putting onscreen are coming off. "There are people who believe the crap that Sea World says," says my friend Michael Rogers. "The people in the ad are not two of them."

That's just the tell, though. If you dig into the factual content of these ads, what you'll discover is that they are deeply misleading, bordering on the outrageous.

See for yourself. Below is the most frequently seen ad, featuring a SeaWorld veterinarian and the company's animal-rescues chief, Pedro Ramos-Navarrete (which is kind of weird, considering that SeaWorld has never rescued an orca nor does it support people such as New Zealand orca scientist Ingrid Visser, who actually is engaged in orca-rescue work). 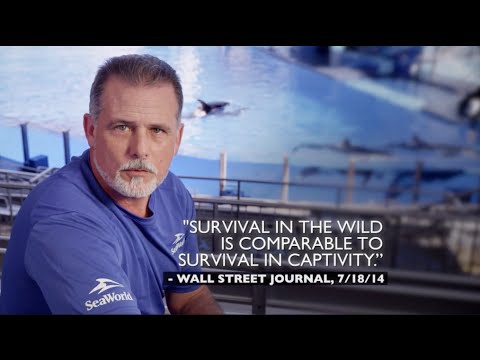 "And government research shows they live just as long as whales in the wild!"

This, over a text that reads:

"Survival in the wild is comparable to survival in captivity." - Wall Street Journal


Note the little sleight of hand there? The first statement actually describes longevity - how long the whales live. The second statement in fact is about survival rates - that is, the likelihood of a whale surviving any given year. These are completely different things.

Then there's the longer SeaWorld propaganda ad addressing the same topic, appended to the above video. It features Chris Dold, SeaWorld's head veterinarian, holding forth to a confused member of the Twitter public, deriding their critics' claims that SeaWorld whales don't live as long in captivity as "false":

"You don't need to take our word for it. Some of the best marine mammal researchers in the world work for the federal government at the Alaska Fisheries Science Center. You know what they found? That killer whales that live at SeaWorld live just as long as killer whales in the wild. One of the authors of that report told the Wall Street Journal, 'Survival in the wild is comparable to survival in captivity.'"

SeaWorld's claim, you see, rests entirely on the work of Alaska scientist Doug DeMaster, who has been compiling statistics on annual survival rates (ASR). These are handy numbers and probably give us an accurate picture of the likelihood of any given orca surviving the year, both in the wild and in captivity.

Back in 1995, DeMaster and his partner found that there was a significant difference in those rates between orcas in captivity and those in the wild, favoring wild orcas by a large percentage (as differences in these rates go). But by 2013, he explained to Politifact, he had found their annual survivorship rates to be comparable. That's the study cited in the WSJ piece as well.

But what SeaWorld isn't telling you is that there's a caveat to DeMaster's observation, and it's a big one:

That's an eight-year data sample to assess how likely an orca is to survive in an institution that has been in operation for over 50. In statistics, that's what we call a "skewed sample," or more precisely, an "inadequate sample."

That's SeaWorld saying, "Hey, we may have been insanely awful in how we handled orcas before, but we've been doing much, much better the last eight years!"

More to the point, annual survival rates won't tell you how long the animals will live - which is, of course, exactly what both Dold and Ramos-Navarette were claiming. All that number gives you is a kind of snapshot of the current health of the population, how likely their animals are to live through the year. If you want to know how long the animals will live, you need to look up longevity statistics.

Now, let's be specific: We don't really have a complete longevity picture for the orcas in SeaWorld's care. We don't have a maximum longevity number, because they have only been in business for a little over fifty years now, and orcas in the wild (particularly females) are known to live often into their 80s, and even beyond. Atop the post, you'll see my 2013 shot of Granny, the matriarch of the southern residents' J clan orcas who is believed to be over 100 years old (though her age is in fact an estimate).

A whale whose age we know a little better is this one: L-25, believed to be about 85. She is also believed to be the mother of Lolita, the L-pod female who has been held captive at the Miami Seaquarium for the past 45 years and counting.

The oldest SeaWorld orca, by contrast, is the female northern resident orca Corky, who was captured as a 2-year-old calf from the A5 pod, whose whereabouts remain well known (though in fact her mother has since passed away). She is 47-years old, roughly the same age as Lolita, who was captured only a few months afterward in the horrific Penn Cove captures that were vividly shown in "Blackfish".

The next oldest are the Icelandic orca females captured on the same day in 1978, Katina and Kasatka, who are estimated to be 39 and 38-years old, respectively. The oldest male in the collection, Ulises (another Icelandic capture) is 37.

Those are, however, the outliers when it comes to longevity at SeaWorld to date. The bottom line is much more grim, especially when we look at average longevity, which can be measured several ways.

As Naomi Rose has explained in detail, SeaWorld is even distorting the annual-survival-rate (ASR) data, which still does not favor SeaWorld:

Meanwhile, as she notes, the average life expectancy for wild orcas is "around 50 to 90 years for females and 30 to70 years for males."

So what does it look like for SeaWorld orcas?

I've compiled a database of SeaWorld orcas, living and dead, wild-and captive-born. I've specifically left out other marine parks' orcas from the database, given that the record there is downright horrific, particularly during the 1960s and '70s, and granting SeaWorld's argument that its superior care should not be tainted by what occurs in other parks. Nor does it include the many calves who died stillborn.

In other words, it should be obvious that captive wild killer whales have not fared well historically at SeaWorld, especially when compared to the wild. There, the southern resident killer whale population that founded SeaWorld has, while officially endangered as one of the effects of that capture period, at least maintained relatively stable numbers. In contrast, 81 percent of SeaWorld's wild population has died, all at ages well below what is considered a normal lifespan in the wild.

And while SeaWorld loves to tout its now-increased standards of veterinary care and husbandry as the reason for arguing "Hey, we've done lots better in the last eight years!" there really is no guarantee that these short-term gains of the recent past will translate into actual longevity for the orcas, including those born in captivity.

They still are subject to the extreme stresses caused by their sterile and extremely limited environment and the obliteration of orca-society norms that they have been wired for over millions of years. They still lead the lives of slaves. There's no doubt the company has light years to go before it can even come close to replicating the complexity of environment and surroundings, as well as the multiple layers of orca social organization, that they can experience in wild waters, even if (in the case of the captive-born whales and damaged goods like Tilikum) that only means life in a seapen similar to Keiko's.

I've always felt the real bottom line for orca captivity lies in the complete history of the affair, and as I note in "Of Orcas and Men: What Killer Whales Can Teach Us":

Study after study has demonstrated that whales in captivity are more than two and a half times more likely to die than whales in the wild. All the care in the world cannot compensate for the stress brought on by placing a large, highly mobile, highly intelligent, and highly social animal with a complex life into a small concrete tank.

Of the 136 orcas taken in captivity from the wild over the years, only 13 still survive. The average lifespan in captivity so far is about eight and a half years. In the wild, the average rises to thirty-one years for males and forty-six for females. Then there is the upper end of the spectrum. In the wild, males will live up to sixty years, and in the Puget Sound, there is a matriarchal female named Granny who is believed to be a hundred years old.


And let's remember one last stark number: Of the 55 whales the SeaWorld and other marine parks removed from the Southern and northern resident populations from 1964 to 1976, exactly two remain alive. One is at SeaWorld: Corky. And the only surviving southern resident is Lolita. She's not even in SeaWorld's collection.