The Real Reason Chameleons Change Color — And It’s NOT Camouflage

What the whaaa? This chameleon's trying to match the colors around him ... and he's absolutely nailing it.

I know! Right? But here's the thing that may surprise you: That's not actually a photo of a chameleon attempting to blend in with the colorful bath towel that he's clinging onto.

It is a photo of a chameleon, and he does happen to match the curtains. But it's more coincidence than careful planning on the chameleon's part.

In fact, chameleons don't even change color for camouflage. They do change their color - but for two lesser-known reasons.

Turn up the heat

The first reason chameleons change their skin color won't be a surprise to anyone who has spent time in a black car under the beaming hot sun on a summer day.

Dark colors absorb light, and therefore heat, while light colors reflect it. Chameleons know this, so they use their skin color like a thermostat to control their body temperature.

It's kinda like swapping out your jeans to put on a bathing suit. Chameleons, like humans, adapt to their environment.

Just like humans will change their outfits or hairstyles to suit their mood (like when we slip into our comfy PJs at the end of the day), a chameleon may cycle through several different looks each day to fit the occasion. Some pet owners can even read their chameleons' emotions just by looking at their color.

Humans and chameleons - not so different after all.

The science behind the magic

Recent scientific discoveries have completely changed what we know about how chameleons change their skin color, and, as it turns out, the anatomy that allows chameleons to achieve this effect is far more complicated than scientists thought.

Previously, scientists believed that chameleons changed their color in a similar fashion to other animals, such as octopuses and squid, who use sacs filled with various skin pigmentation to alter their appearance.

But just last year, scientists discovered that chameleon skin color is controlled by an intricately coordinated system of nanocrystals that expand and contract to allow certain wavelengths of light through.

If you're in the mood for science jargon, National Geographic posted a video explaining the recent discovery. 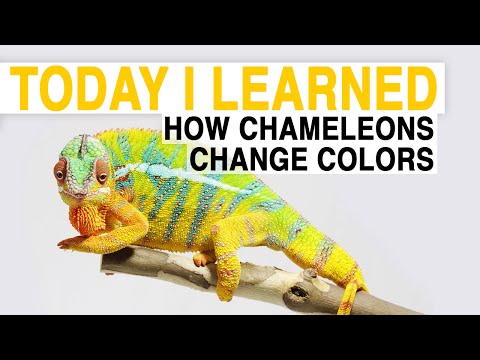 If that's enough technical lingo for you, feel free to enjoy the beautiful, non-doctored colors of chameleons below.