Who Needs SeaWorld If You've Got This?

A whale is jumping out of a high school gymnasium floor.

That's the subject of a video quickly going viral, raising all kinds of questions about how and why, and also the age-old conundrum: What is reality?

Many commenters on the video dismiss it as a post-production clip used to promote a company called Magic Leap. Obviously the whale is not an actual whale, but whether the hologram actually is visible in person is the question puzzling everyone.

"It's a promo. It's fake," one commenter wrote on Facebook. "The Magic Leap is Augmented Reality but requires the user to have glasses, goggles, etc. Notice the audience doesn't have any of those, and in most cases don't react appropriately or the right time?!?"

Another said it appeared to be basically like watching a movie: "Looks like a large screen and the only real kids are at bottom of screen. Kids against wall don't react."

Others were awed and just wanted to know how it worked, if it worked.

But no one seems to know exactly what Magic Leap is. All people seem to be saying is: Magic Leap is about to change reality as we know it.

"Augmented reality" is what Magic Leap has been working toward, and the company is rumored to be incredibly secretive about how that works.

The viral whale video, though, is sparking hope in people who want to see an end to marine mammal captivity in places like SeaWorld, where live animals are bred for the sake of keeping them in tanks for human entertainment. This technology could be magical enough to make keeping real live animals in tanks a thing of the past.

"It's a cool concept for sure," a commenter wrote, "but the tech has been kept all secretive. We'll see if they can deliver!" It's even a concept cool enough for Google to invest in.

We asked the famously secretive company to comment, not even expecting a reply. "Is this a green screen? Post-production edit? Everyone on the internet seems to be baffled and curious," The Dodo wrote in an email to Magic Leap.

Surprisingly, a few minutes later, Magic Leap replied: "Hi Sarah: assuming you read the caption at the bottom?" (The caption to the video reads simply: "3D Magic, Thanks Magic Leap.")

We wrote immediately back to Magic Leap: "Yep: 3D Magic? I guess I'm asking: where does the magic come from?"

While the whale clip is unclear whether it represents the technology or was manufactured to look like it, one thing's for sure: Augmented reality is coming ... whether or not we know what it is.

Watch the video below for a first look at the hologram technology that could put an end to keeping live animals in tanks: 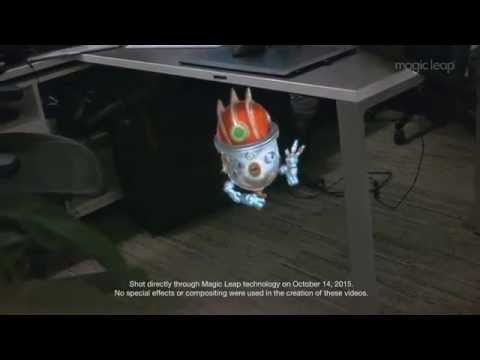