"The dungeon-like conditions that the tigers are forced to endure ... harm their physical health and psychological well being, and deny them much that is natural and important to a tiger."

They haven't had the chance to retreat from a midsummer day's heat under a tree, or lazily stretch out their bodies in a field of grass and soft earth.

That's because in December 2004, these tigers - who were bred in captivity - were purchased by an indoor aquarium in Houston, Texas.

Now, people are gearing up to fight like hell just to get them out. 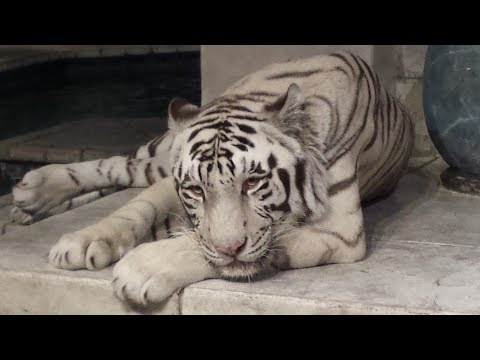 The Downtown Aquarium houses an aquarium on the first floor and a restaurant on the second.

The four white tigers - Nero, Marina, Coral and Reef, all between the ages of 12 and 13 - are the residents of the aquarium's "Maharaja's Temple" attraction.

The indoor exhibit has the tigers roaming inside a concrete, movie-set-like space with only a glass barrier giving them access to a view of the outside world. Sadly, that world consists only of visitors who line up to gawk at them.

When the tigers aren't on display, they reside in the backroom holding areas not visible to the public, confined to cells.

"The dungeon-like conditions that the tigers are forced to endure at Houston's Downtown Aquarium harm their physical health and psychological well being, and deny them much that is natural and important to a tiger," Dr. Jennifer Conrad, a veterinarian with the Animal Legal Defense Fund (ALDF), said in a statement.

"It is cruel to confine complex, roaming carnivores such as tigers to a tiny, dark, artificial, unenriched enclosure where they never see any daylight, much less bask in sunshine," she added. "[They] are at risk for serious long-term, debilitating injuries from being forced to live on slippery, unyielding concrete their entire lives."

On Monday, the ALDF served Landry's Inc., the company that owns Downtown Aquarium, a notice of intent to sue over alleged violations of the Endangered Species Act (ESA). The ALDF plans to follow through with the lawsuit within 60 days if Landry's chooses to not rehome the tigers to reputable, accredited sanctuaries.

The ALDF is offering to relocate the tigers at no cost to Landry's.

But the aquarium is defending itself against the accusations brought by the ALDF. James Prappas, director of animal husbandry at the aquarium, told The Dodo that the indoor exhibit has skylights and windows that allow some natural light, as well as an air system that meets Association of Zoos & Aquariums (AZA) humidity and ventilation guidelines. 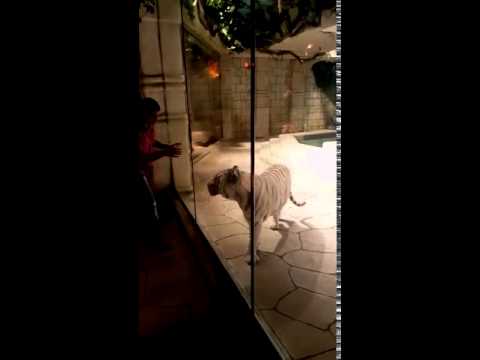 Prappas also said that the tigers' holding area gives them exposure to fresh air, and that they receive enrichment opportunities throughout the day.

However, that hasn't satisfied animal advocates - who have been concerned about Downtown Aquarium for years.

Before the tigers arrived at the aquarium in 2004, there was a backlash against housing the four tigers in such an environment. But Carney Anne Nasser, one of the ALDF attorneys involved in the suit, told The Dodo that it's a different playing field in 2016, because there have been changes to the Endangered Species Act and are upcoming changes to the AZA guidelines (the group that accredits Downtown Aquarium) about keeping captive tigers, as well as more recent court precedents relating to captive tigers.

The ALDF is arguing that the tigers' current living conditions violate a section of the AZA's tiger care manual, which states that all tiger enclosures should have an outdoor space, natural vegetation and opportunities for the tigers to engage in natural behaviors such as running, jumping, climbing and being able to hide from the public.

According to the ALDF's intent-to-sue notice, whether in the exhibition area or holding area, the four white tigers are being deprived of a natural experience. It also says that the tigers risk developing painful foot, joint muscle and circulatory problems from living on "unnatural, unyielding" concrete.

In addition to physical issues and risks, psychological factors were mentioned as well. "Indeed, the tigers have been observed pacing and lunging at the glass wall separating the tigers from the public - all common stress responses for tigers living in close confinement with no ability to seek privacy from the viewing public," the notice reads. 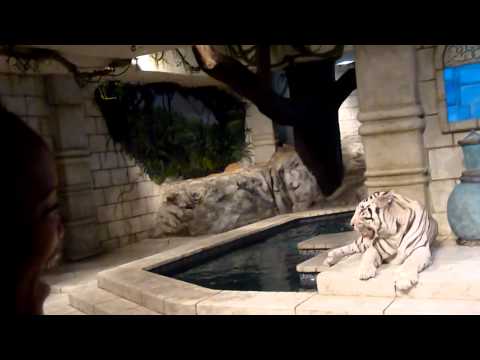 Yet Landry's states that the allegations made against the Downtown Aquarium's tiger exhibit are "false and manipulative" and threatened to file a lawsuit for slander and libel, according to the Houston Chronicle.

"Our tigers receive the highest level of care and treatment and have always exhibited the signs of well-maintained animals," Steven Scheinthal, general counsel for Landry's, said in a statement. "We are aware of the proposed changes to the AZA accreditation standards and once enacted, we will make every effort to comply to the new standards. If we are unable to make such changes, we will move our tigers to a new home." 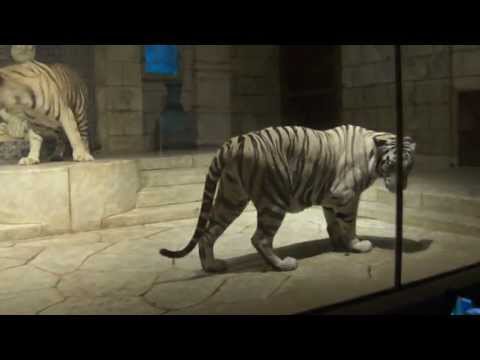 Yet while Nasser told The Dodo that two sanctuaries vetted and approved by the ALDF have already committed to taking in the tigers should Landry's give them up, Scheinthal said that, if Landry's decides to rehome the tigers, it would not send them to the sanctuaries lined up by the ALDF, but a new home of the aquarium's own choosing.

It's unclear what those sanctuaries would be.

For now, the fate and future of the four white tigers, who have never known a life spent in a natural habitat, hang in the balance. But there is hope that after 12 years, the right thing will finally be done for them - because 12 years is far too long for any animal to live such a confined life behind glass and bars.

"In this post-Blackfish era, an enlightening public is turning away from the notion that displaying animals for purely entertainment reasons, and without any regard to their complex species-specific needs, is ever appropriate," Nasser said.

Want to encourage the Downtown Aquarium to allow its tigers to retire to a sanctuary? Contact the aquarium at 713-223-3474 or get in touch through social media via Facebook and Twitter. You can also sign a petition here.