What You Should ACTUALLY Do If You See A Bear

If you're at all outdoorsy, you may, at one time or another, come face-to-face with a bear.

You can handle it. You just need to know what to do - and what not to do.

Over the past two months, there has been an increasing number of run-ins between people and wild animals, particularly bears, according to Born Free USA, an animal advocacy nonprofit organization. These interactions have sometimes resulted in injury to people and their pets - or even death.

Black bears are distributed across the U.S. in at least 40 states, while brown bears, including grizzly bears, tend to live in the Northwest and Alaska. And sometimes people enter into bear territory without a clue.

What to do if you see either of these two main classes of bears is pretty similar - but with one key difference, which you'll need to know if the bear actually starts to attack.

While a bear encounter might be shocking, panicking could only make it worse. 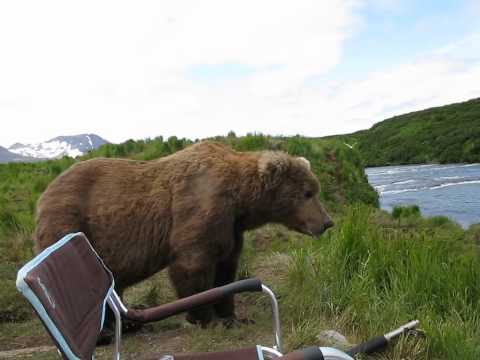 Chris Norcott, a wildlife photographer who focuses particularly on black bears, has a refreshing perspective to help keep you calm. "If you encounter a black bear, consider yourself very lucky," Norcott told The Dodo. "You'll be fortunate because they are shy and timid animals. [Like] any wild animal, black bears need to be respected."

And Norcott's right. Bears almost never attack people. You're far more likely to get struck by lightning. "Most negative black bear encounters are caused by surprising the bears or giving them a reason to think you are a threat," Born Free USA said.

That's why you really have to take precautions when going into bear country.

If you're out walking in the woods and you spot a bear, act like you would with a stranger. You wouldn't run up to a person on the street and hug them, nor would you sprint away screaming. Be calm, stand your ground and talk calmly so the bear knows you're there.

"Give the bear space and he or she will usually go about their business while ignoring your presence," Norcott said.

But always make your presence known. "Black bears are naturally fearful of humans, so it's not wise to surprise a black bear," Norcott said.

Slowly wave your arms as you back away, Born Free USA advises: "Make no sudden movements and always leave the bear an escape route."

"Bears are not generally aggressive toward people, and we ask visitors to be assertive if a bear enters a campsite," Scott Gediman, a spokesman for Yosemite National Park in California, told The Dodo.

Yosemite is home to approximately 500 black bears, he said. "Visitors are asked to say, 'Go away bear!' and other words to that effect to encourage the bear to leave." National parks don't want bears to associate people with food sources, which can lead to more run-ins between hungry bears and people. 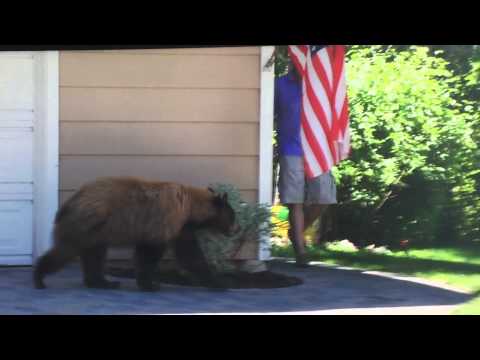 Hike in a group of at least three people.

Bears don't like to approach groups of people, so hiking with friends is much safer than hiking alone.

But this isn't enough: During the hike, make sure to be alert, Gunther advised. Make noise in blind spots along the trail so you don't surprise any bears along the way.

And always hike with bear spray, a type of mace that's derived from hot peppers to temporarily make the bear's eyes tear up and cause a burning sensation. It's over 90 percent effective at preventing a bear attack when a bear starts getting aggressive.

Running away might incite a bear to chase you.

Rather, retreat calmly to a distance about the length of a football field.

If a black bear attacks, fight back.

Most likely, the black bear will just go about his own business. "Black bears are naturally inclined to flee from what they perceive as danger rather than attack," Norcott said. "Black bears are also excellent communicators and very predictable if you understand their body language and vocalizations."

If things start to get weird, and a black bear stands on his hind legs, don't flip out. This is usually a sign of curiosity, not necessarily one of aggression.

If a black bear pounces forward on his front feet and bellows, this is a sign he's afraid.

"Mothers with cubs sometimes make 'bluff charges': short rushes or a series of forward pounces," Born Free USA said. "These are signs of nervousness and not an intent to attack. If this happens, momentarily hold your ground. Then, keep backing away and talking softly."

If the worst happens, and there's a terrible miscommunication, don't play dead when a black bear attacks, but fight back.

If a brown bear starts seeming agitated, take it very seriously. In the extremely rare case that a brown bear actually starts attacking you, that's when you need to play dead.

"Lie flat on your stomach with your pack on and your hands behind your neck," Gunther said.

Some totally obvious things to remember:

Never feed any kind of bear.

Feeding any kind of wild animal can make them habituated to humans, which can be dangerous for the animal and for people, so keep food out of reach and in tight containers.

"Keep in mind that bears have an exceptional sense of smell - seven times more powerful than dogs' - and can detect odors over a mile away," Born Free USA said. "Avoid packing odorous food and use bear-proof, odor-proof containers. Do not leave food or ice chests on decks or in vehicles."

If you're camping, learn how to hang food at least 10 feet off the ground.

Never take a selfie with a bear.

This should really be implied, but, amazingly enough, some people get carried away and feel like they have to snap a close-up with wild animals.

"In the last two years, there has been an increase in people vying for an impressive selfie with animals ranging from seal pups, to bison, to black bears," Adam Roberts, CEO of Born Free USA, said. "This is becoming a dangerous epidemic that is reckless and harmful for both the public and wildlife. No selfie is worth getting killed or condemning an animal to death."

It doesn't mean you can never go outside again. What it does mean is that you should be prepared. Keep your dog (or cat) on a leash, and leave any pungent-smelling food at home, since bears have an acute sense of smell. Most of all, be prepared if you find yourself walking through bear country.

Luckily, fatalities from bear encounters are incredibly low: An average of just about three people die each year from a bear attack. You're more likely to die from being stung by a bee.

Like Norcott said, we should feel lucky if we see a bear in the wild - but to feel lucky, you have to live to tell the story.