There's nothing quite as incredible as having an unexpected animal encounter in the wild.

A man who goes by Johnny O on social media was exploring the English Bay in Vancouver, and heard that there had been a whale feeding in the area recently. He and his friend decided to set out to try and find the whale. So, technically, the encounter wasn't totally unexpected - but they never imagined how close they'd actually get.

The two friends were just lingering, using their phones to film their beautiful surroundings ... when they realized the whale was close by.

"My heart started racing when I saw small fish swimming to the surface in a frenzy, I knew it must be close," Johnny wrote on YouTube.

Suddenly, a burst of water came flying at them, and the whale appeared ...

... and almost hit one of the men in the face with his giant tail.

"This was the most amazing wildlife experience of my life, a true bucket-list moment," Johnny wrote on YouTube. "You can hear in my voice how excited I was."

Check out the full video of this incredible encounter below: 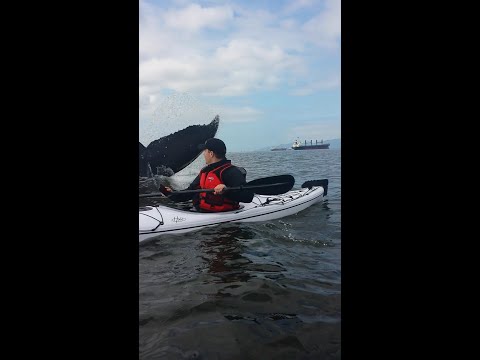 Of course, this wasn't the first whale to surprise a kayaker. Check out these orcas who did the same thing off the coast of Washington.