While some people might pay to see dolphins in captivity, it turns out the most enriching encounters with those ocean-going mammals just might come from helping to preserve them in the wild.

Even before setting out to swim the rough waters of the Cook Strait in New Zealand, Adam Walker knew it was going to be one of the most difficult challenges of his life. The feat had only been accomplished by four others before him, but the British swimmer was determined to cross that perilous strait, all to raise funds for the Whale and Dolphin Conservation Society.

Little did he know that he'd soon be joined by the very animals he was swimming to save -- and that they, in return, just may have saved him.

As Walker battled through the churning waves along the 16-mile stretch of ocean between New Zealand's North and South Islands, he spotted below him something he'd hoped not to see: the shadowy figure of what looked to be a 6-foot-long great white shark lurking beneath him.

Large sharks commonly found in the straight, but fortunately so too are animals known to protect swimmers from them. Moments after Walker noticed the shark-shaped creature, he suddenly found himself surrounded by a pod of around ten dolphins. 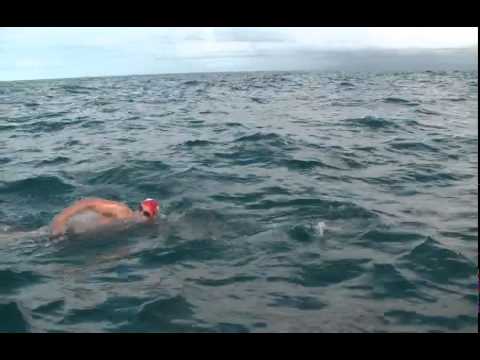 For more than an hour, the dolphins stayed in a tight formation around him, with one or two occasionally breaking away to leap through the air as if to urge their exhausted human advocate along his way.

"It would be a nice thought they were thinking, we will just help our pal get through," Walker recalled to Fairfax NZ News.

And in a way, the dolphins did. Walker managed to finish the journey unscathed, crossing the strait in 8 hours and 36 minutes -- reminded, perhaps, in the most remarkable way just who he had done it all for.

So far, the long-distance swimmer has crossed six sea passages as part of his Ocean 7 Challenge to raise money for dolphin and whales.