Warthog Gets A Bath From A Whole Family of Mongoose

Friendship means more than just having someone's back. Sometimes, you actually have to climb up on their shoulders.

A conservationist at Uganda's Queen Elizabeth National Park recently spotted a warthog and mongoose who had formed just such a partnership, catching the animal duo's peculiar cleaning ritual on camera.

According to Dr. Andy Plumptre, a program director with the Wildlife Conservation Society, the park's warthogs have learned to lie down when they are near mongooses who, in turn, eat ticks off the warthogs' bodies and keep their piggy friends happily parasite-free.

And it's not just Dr. Plumptre who has observed the unusual arrangement: BBC filmmakers previously recorded the interspecies cleaning service for a 2010 episode of the mongoose documentary Banded Brothers.

"Such partnerships between different mammal species are rare, and this particular interaction illustrates a great deal of trust between participants," said Dr. Plumptre, who described the behavior for science newsletter Suiform Soundings, in a statement. "It makes you wonder what else may be happening between species that we don't see because, in order to see it, both species need to be unafraid of people." 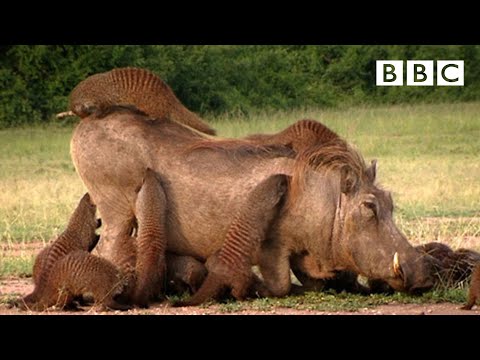 To help support the protection of these clever and fascinating animals, consider making a donation to the Wildlife Conservation Society by clicking here.