Welcome to Kavachi, a volcano located in the Southwest Pacific Ocean, in the Solomon Islands. Its first recorded eruption was in 1939, and the most recent eruption occurred in January of 2014. In addition to venting the Earth's fiery innards, Kavachi also serves as a home for sea creatures, as National Geographic reported.

"When it's erupting, there's no way anything could live in there," says ocean engineer Brennan Phillips in the video below. That's what makes discovering these animals down inside the volcano so perplexing. They're living in a place where they could "die at any moment," so how do they survive? These are the questions which arise after viewing this stunning footage.

The descent into the volcano begins.

The water's color dramatically changes as the camera lowers into the volcanic plume.

Here is the first animal spotted: the sixgill stingray.

Throughout its hour-long journey inside the underwater volcano, the camera spotted three species: the scalloped hammerhead shark, the silky shark and the sixgill stingray.

In the video, Phillips reflects on discovering that these animals live in an active volcano: "Do they leave? Do they have some sort of sign that it's about to erupt? Do they blow up sky-high in little bits?" The researchers arrived with one question and returned with many. According to Phillips, that's what makes this project such a great one. 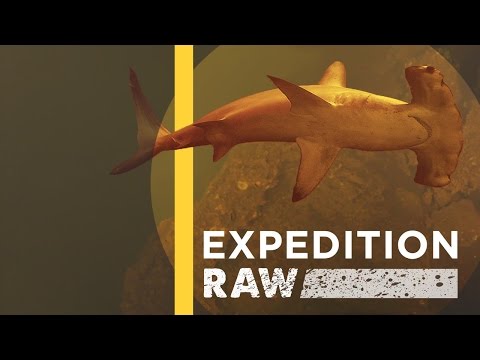