Shocking footage from an investigation at a National Institutes of Health (NIH) lab was released Monday, showing infant monkeys separated from their mothers and subjected to inhumane experiments.

The footage was part of an exposé conducted by PETA, which gained the footage of the lab in Poolesville, Maryland via a Freedom of Information Act (FOIA) request for 500 hours of footage. The lab in question tests drugs used to treat human children and adults suffering from mental illness. Disturbances and stressful conditions are simulated in the lab to induce psychological discomfort, anxiety, aggression and fear, after which the drugs are tested on the animals.

The lab holds approximately 200 monkeys, many of whom are kept in unnatural cages, and some of whom are fed alcohol to study its effects. The separation of young monkeys from their mothers is one of the main tenets of the investigation - in one alarming incident, a baby monkey tries to wake his sedated mother from sleep while growing visibly distressed at her lack of response.

While proponents of the research argue that it's used to test vital drugs for people with mental illnesses, critics say that given current brain imaging capabilities, human-based research allows scientists to study the causes and treatments of mental illness in humans - without having to use animals at all.

"Monkeys are being subjected to what I consider inhumane experiments at a laboratory in Maryland that is funded by public money," said primatologist Dr. Jane Goodall in a statement. "I am shocked and saddened that this is so."

The experiments are oddly reminiscent of the infamous monkey experiments conducted by the American psychologist Harry Harlow in the mid-1900s. Harlow conducted tests to measure the impact on a monkey when he was separated from his mother at a young age, using wire-frame or cloth "surrogate mothers" to simulate real ones. While his experiments provided valuable insights into the importance of attachment in primates, they resulted in severe psychological disturbances in animals, detailed in the journalist Deborah Blum's biography of Harlow. Animal advocates today contend that experiments that separate primate mothers and babies are inhumane. And now, separation-induced anxiety is still being used as a variable in government-funded lab experiments - over 50 years after Harlow's controversial experiments.

WARNING: Images below may be upsetting to some audiences. 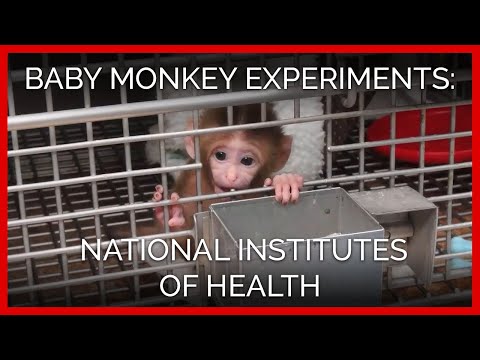 Go to this page to tell NIH to stop performing these kinds of experiments on lab monkeys.