Today, the Animal Legal Defense Fund (ALDF) released footage from its undercover investigation of Southern Roc Airedales, a puppy mill in Torrance County, New Mexico. Startling in its despair, the Southern Roc footage underscores that without vigilant enforcement of our laws, dogs will continue to suffer while puppy millers reap the cruel profits.

During two visits to Southern Roc, ALDF's investigator discovered a litany of Animal Welfare Act (AWA) violations, observing dogs with filthy, matted fur in barren, rundown enclosures that failed to meet even their most basic needs. Perhaps most disturbing, when an adult dog named Eve leapt up to greet the investigator, she landed on the "hot wire" that ran along the ramshackle fence and cried out in pain. The owner of this nightmarish facility, Southern Sollars, explained that the fencing is specifically designed to injure the dogs should they try to escape. 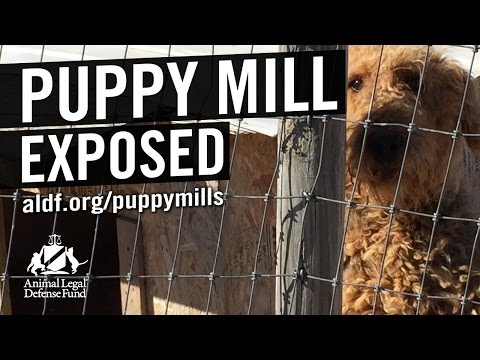 According to their website, Sollars has been breeding Airedale Terriers for 27 years. With at least six "studs" and sixteen "brood bitches," one can only imagine the staggering number of puppies that have been born at the facility, each deprived of proper care in those early weeks so critical to their long-term welfare.

While Ms. Sollars has presumably netted a pretty penny over the years-she offered a puppy to the investigator, who'd posed as a prospective buyer, for $1000-you wouldn't know it by looking at the place. The grungy, timeworn kennel fails to meet even the AWA's bare minimum requirements:

The investigator observed Black Hawk, an adult male, drinking from a filthy metal washtub filled with green, algae-ridden water. Even more alarming, Black Hawk was actually better off than the other dogs, whose water bowls had frozen over entirely.

Despite freezing temperatures, the dogs had nowhere to escape from the cold, a clear violation of AWA's requirements that facilities have separate shelter structures for each dog and group structures that would at least allow them to sit, stand, or turnabout freely. It was a particularly bleak scene as Mercedes and Eve, though huddled together for warmth, couldn't stop shivering.

Though the AWA requires that enclosures be spot-cleaned daily and sanitized regularly, the dirt kennel floor was hardened from excess feces and urine. The investigator observed dogs navigating their way between piles of feces, and he noted the odor was overwhelming.

As if the hot wire weren't bad enough, the fence is also in a state of complete disrepair, with gaping holes with sharp protruding edges that could seriously injure the dogs.

Evidence Served Up on Silver Platter to USDA

Despite having been in the puppy mill business since the '80s, Sollars lacks the requisite license for "dealers" under the Animal Welfare Act. Being unlicensed and, likely unknown to authorities, Southern Roc's animal exploitation and abuse might have gone undiscovered, if not for ALDF's investigations team. Fortunately, ALDF was able to step up, documenting the various violations in order to bring them to the attention of the United States Department of Agriculture (USDA) for appropriate enforcement action.

In a complaint filed with the USDA today, ALDF has presented the laundry list of serious AWA violations committed by Southern Roc. ALDF has demanded that the USDA shut down the facility and confiscate the dogs, so that they may be rehabilitated and adopted into loving homes. ALDF also seeks significant fines: up to $2500 per violation, where each day that a violation continues is yet an additional, separate violation.

Waging the Battle Against Puppy Mills

While puppy mills continue to do big business across the country, investigations of facilities like Southern Roc, combined with legislative enactments at the state and local levels, provide cause for hope.

As more consumers learn that the majority of pet stores source their puppy "inventory" from puppy mills, local ordinances prohibiting dog sales at stores have begun popping up across the country. These bans on retail sales have the added benefit of increasing shelter adoptions and decreasing euthanasia. Some states have taken another approach, enacting "puppy lemon laws" to help purchasers get justice when they've been misled by the seller about the health or origin of the puppy. ALDF is currently leveraging these laws in suits against pet store chains in California and Illinois, putting stores on notice that they can no longer hide the horrific conditions in which their puppies were raised.

Consumers should know that even properly licensed puppy mills churn out animals in repulsive conditions, and the puppies are likely to suffer from painful medical conditions as a result of the inbreeding involved with producing purebred dogs. The only way to end this practice is to shift demand to shelters and rescues, where lovable, adoptable dogs of all kinds-even purebreds-can be found.

In addition to educating anyone you may know who plans to buy from a pet store or a miller, join ALDF's fight against puppy mills by contacting your local legislature to advocate for measures banning retail sales of dogs. Finally, if you or anyone you know may have purchased a dog from Southern Roc, please contact ALDF.