"Udder flaming" is a dairy industry practice that involves passing a large flame beneath dairy cows to burn off the hair from their udders.

Farmers say it feels just like passing your hand through a flame - but unlike this scenario, cows aren't voluntarily passing their bodies over fire.

"The cows aren't too keen on 'flamin' udders!'" one commenter wrote on an online dairy forum, but then said that the cows "don't really notice."

But why pass a flame under a cow in the first place?

"Hair on udders allows more bacterial growth, which make them harder to clean," Susie Coston, national shelter director of Farm Sanctuary, told The Dodo, adding that the practice is used to prevent mastitis, an infection that can arise in any nursing mammal, even humans.

If done correctly, you do not burn the cow, Coston said. But there's still something chilling about the practice.

"Burning [the hair] off is a quicker, cheaper and easier way to do something that is not about the cow, but about our need to have her produce too much milk, [and] be milked continuously using machines," Coston explained. "Cows producing 50 to 100 pounds of milk is the problem. So we created something unnatural and continue to need to find ways to make that unnatural thing work for us."

The practice is pretty common - and it has been for years, according to Gene Baur, cofounder and president of Farm Sanctuary.

"It's just another example of these animals seen as milk machines instead of living creatures," Baur told The Dodo. "When you're burning udders, there can be pain. They say they're doing it quickly, but accidents can happen."

Cows are also very social creatures; they have emotional lives comparable to other mammals, even dogs. So the idea that cows are confined in milking pens while a sudden flame is passed under them is just another thing about massive dairy industry practices that can be hard to stomach.

"Cows, like all animals, are social creatures, and they're very much influenced by their social environment," Baur said. "Burning the udders is just another example of how these animals are disrespected."

Baur added that treating farm animals as just production units isn't good for anyone. "It creates a whole feeling of stress and anxiety and discord," Baur said. "All the animals there feel it, and the people feel it, and it's just unhealthy." 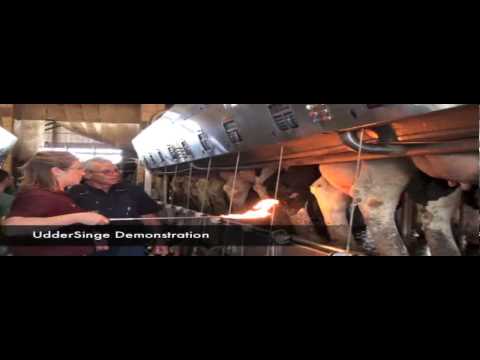 The Dairy Farmers of America did not reply to The Dodo's request for comment.

Learn how to cut down on dairy in your diet here. Even a little bit helps.

Farm Sanctuary is a safe haven for injured and neglected farm animals. To help support them you can make a donation here: