This Is What Happened When Someone Threw Out A Plastic Fork

Another turtle has been found with a piece of discarded plastic lodged up her nose.

Back in August, turtle researcher Nathan Robinson found an olive ridley sea turtle off the coast of Costa Rica with a straw sticking out his face. Footage of the team's painful efforts to remove the straw went viral, along with pleas to reconsider using single-use plastic.

Everyone was optimistic that it was a one-time incident. But unfortunately, just a few months later, it's happened again.

This time, Robinson was working with a turtle on Costa Rica's Playa Ostional when a tourist ran up to the research team begging for help: A turtle had been spotted with something stuck up her nose.

The researchers jumped into action. "We kind of looked each other and grabbed our equipment and ran," Robinson told The Dodo. "I kind of had the thought like, what is in this sea turtle's nose? It can't be another straw."

When they arrived at the turtle's side, they found something worse. The female olive ridley was scurrying back into the water after nesting with the handle of a plastic utensil sticking out of her nose.

"You could see the object sticking out," Robinson said. "It was very unexpected ... you can kind of hear the gasps, and hear the response."

The team was hours away from veterinary care, but knew they couldn't let the turtle return home with the utensil, which turned out to be a fork, up her nose. "It's obvious that an object like this sticking out of the nose is going to obstruct breathing," Robinson explained.

So they set about removing it. Just like the first video, the footage is difficult to watch, as the turtle is clearly in pain. But anesthesia is also very risky in reptiles, Robinson said, and taking her to a veterinarian could have involved days of travel and observation.

"We decided the least stressful thing for this animals ... was just to remove it there and then," he explained.

Fortunately, the procedure was quick, and as soon as it was removed the turtle seemed happy to rediscover her airways, Robinson said.

"There were a couple of moments where you could see her taking these little shallow breaths," he noted. "She seemed active, she wasn't bleeding and she seemed very healthy ... she swam back into the waves."

The rescue made a world of difference to this individual sea turtle, but it also provided insight into how the sea turtles are coming across the plastic. While Robinson previously speculated that the first turtle had impaled himself while rummaging around on the ocean floor, the position of the plastic fork, which had the head back in the turtle's nasal passages rather than sticking out, indicates that the animals are actually ingesting the plastic. 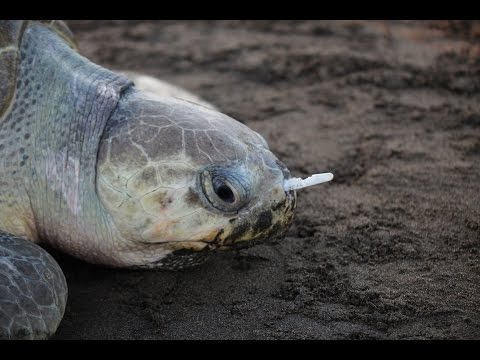 When they try to throw them up, Robinson explained, the rigid plastic is getting lodged in their nostrils instead of coming out their mouths. "That probably explains why the previous straw was so deeply lodged in there as well," he added.

And that's not good news. While these two incidents appear to be the first ever reported, Robinson suggested that there could be many more out there if it really is the case that the animals are trying to throw up the garbage they eat.

"Unless it's a particularly long object, there could be hundreds of thousands of animals suffering from these kinds of afflictions but we can't see it sticking out of their nose," he explained.

Unfortunately, these rescues are just two points in a long string of animals who ingest or become entangled in human detritus. And whether two turtles or thousands are affected, the video is a harsh reminder of the painful effects that trash can have on wildlife.

"This is the effect we're having on the planet by producing so much single-use plastic and disposing of it in irresponsible ways," Robinson said. "It's somewhat of a wakeup call."

Robinson works with The Leatherback Trust, a group that works to save the endangered leatherback sea turtle. If you'd like to support turtle conservation - and help the team rescue any more turtles that come their way - you can make a donation online.