Puppy Punished In Most Horrific Way Ever ... For Chewing On Owner’s Phone

This puppy couldn't possibly understand his owner's rage - a rage that found the tiny animal drenched in boiling water and flung from a fourth-floor balcony.

His crime? Chewing on a cell phone.

But this puppy certainly could understand the compassion of a passerby. After all, if not for a woman who chose not to walk past the tiny creature, scalded and writhing on the concrete below, his story would have ended before it could even begin: at just 6 weeks old.

Instead, he found love, healing and maybe even a miracle - to go along with his perfectly fitting new name, Tuffy.

Tuffy's agonizing odyssey back to the land of the living would require more than the efforts of a local vet. His savior drove him an hour outside of Chengdu to Animals Asia, a group best known for its efforts to rescue bears from the bile trade.

"When I saw Tuffy I was shocked and sickened to my core," Drayton said. "Never had I seen an animal in so much pain."

Indeed, blisters covered much of the puppy's body. While round-the-clock injections were needed just to keep him alive, Tuffy's burnt eyelids meant sleeping with his eyes open.

"Cases of animal cruelty and neglect are never something you get used to," Animals Asia founder Jill Robinson recalled. "You just learn to put your emotions aside and focus on what you need to do to help. Never had I seen an animal in so much pain."

Cue the cavalcade of compassion. A team of specialists, including a surgeon who flew in from Hong Kong, got to work. Skin was grafted from Tuffy's scrotum, one of the few areas left unscathed from the attack.

"Tucked under his body, this had been a place where the boiling water hadn't reached - so Tuffy was duly neutered, with nothing left to waste," Robinson said.

But repairing a puppy's broken body was one thing. Bringing a withered spirit back from the brink was another.

Soon, just about everyone at Animals Asia was sporting Tuffy T-shirts. Even strangers donated to the cause. And the organization donated all of Tuffy's nursing care.

But this puppy will never need to fight again. Because the angel who first took Tuffy under her wing, Yan Yingying, is now her forever owner. 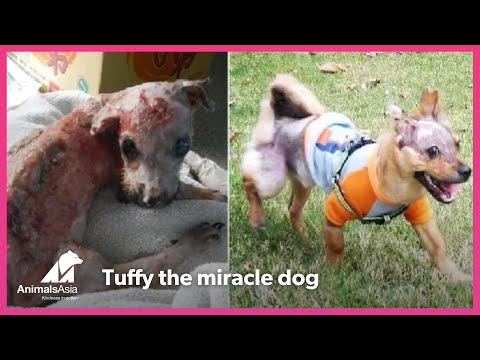