What Really Happened In That Viral Shark Video

A professional surfer had a terrifying run-in with a shark during a surfing competition this weekend in South Africa - and after the heart-stopping video went viral, many wondered why the incident happened in the first place.

"Holy shit! Excuse me," the announcer's voice, trying to keep calm, said, as former surfing world champion Mick Fanning faltered beside a fin sticking up out of the rolling waves.

Fanning put his board between himself and the shark and hit the animal with his fist to get the shark to swim away.

"What a moment in pro surfing," the announcer said, as Fanning safely escaped the water uninjured. The video of the incident caught on live TV quickly went viral and garnered media coverage all over the world.

The Dodo spoke with George Burgess, noted shark expert and director of the International Shark Attack File at the Florida Museum of Natural History, to understand what the shark really had in mind when approaching the surfer.

"It was a situation where the white shark was obviously interested in the human," Burgess told The Dodo. But, he added, the shark likely did not want to eat anyone.

Burgess said it appears the shark came to investigate the "thing" in the water, then got tangled up in the leash connecting the surfer and the surfboard. "But the reality is that this situation was more likely to be a situation where the shark was investigating a floating object at the water's surface than a full scale attack," he explained.

Burgess said that when these animals - the white sharks that riddle the waters around this part of South Africa -decide to really bite, they "take no prisoners." Great white sharks tend to come up to things, and even bite them, just to investigate, Burgess said. "The reality is most of those videos you see of the sharks jumping out of the water chasing something, they've been lured by photographers using styrofoam props in the shape of a seal," Burgess said.

In fact, you are more likely to die from lightning, fireworks and even sun exposure than a shark attack: Your chance of being killed by a shark is about 1 in 3.7 million.

What should you do if you do have an encounter? First and foremost, avoid locations that are famously full of sharks. "The location where this occurred is a very shark-y area," Burgess said.

Burgess added, though, that if you're under attack anywhere, what Fanning did - acting aggressively and putting something between the shark and yourself - is what you should do. Fanning's actions gave him time to safely escape the water.

Watch the full video of the shark run-in here: 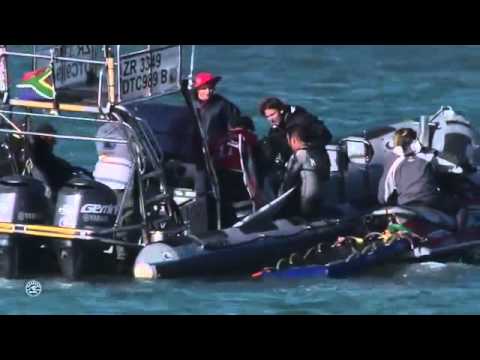 And learn more about the reasons behind recent shark attacks in the U.S. here.