In early September, temperatures in southern Ontario rose above 31°C (88°F). Despite the heat, activists with the animal rights group Sympathy at Slaughter came out to show compassion for the animals who would be suffering in fear in the back of transport trucks arriving at Fearmans Pork in Burlington, Ontario.

What is witnessed in the back of these transport trucks is never a pretty sight. "Each day that I wake up with the thought of bearing witness in mind, I feel a knot in my chest anticipating how much suffering I will see during my visit to the slaughterhouse." Says Hannah Gregus who regularly participates in Sympathy at Slaughter's actions. "But still I go. I go because to at least be present at the scene of another's pain and suffering, even when I cannot stop it, feels important; to be there sending empathy and compassion to as many individuals as I can connect with while the death trucks idle at a stoplight, or stall outside the slaughterhouse-this is worthwhile."

Nevertheless, activists got even more than they had bargained for on this occasion. Instead of the inquisitive faces of pigs gazing back at them, hoping for a sip of water, this time they saw nothing but the corpses of pigs who had died en route. 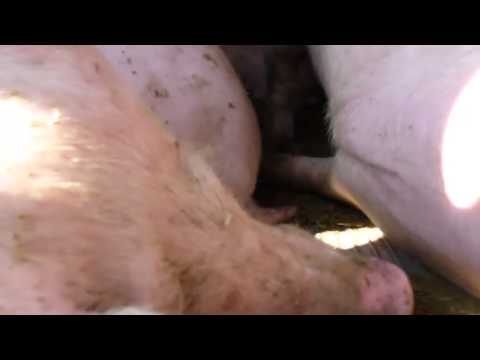 While this may seem like a one-time, horrific event, similar tragedies are surprisingly common in Canada's livestock transport industry. Currently, Canadian transport regulations allow animals to be transported for up to 52 hours without food, water, or rest. As a result it is estimated that over 8 million animals a year die as a result of transport in Canada.

"Farmed animals in Canada are exposed to all weather extremes. Transport trucks are not adequately enclosed or climate controlled. During the summer, temperatures inside trucks can reach well over 40˚C, particularly when at a standstill. This can lead to heat stress and heart attacks; combined with high ammonia levels, it can cause death by suffocation. During the winter, exposure to snow, frigid winds, freezing temperatures, and extreme wind chill can cause animals to become frozen to the floor or sides of the trailer and possibly freeze to death."

In 2014, Mercy for Animals documented pigs on several trucks dying in both hot and cold transport conditions through Canada. Another Mercy for Animals investigation released in March 2015 shows how many chickens transported through the Canadian winter arrive frozen solid. As one worker describes, "You'll see birds that look like hockey pucks."

While cruel practices like these are incredibly common in Canada's animal transport industry, compassionate consumers can help end the needless suffering of these animals by cutting the products of this industry out of their diets.