5 Fad Pets Who Went The Way Of The Tibetan Mastiff

Tibetan mastiffs are apparently so over. Too bad for the dogs, who once sold for as much as $1.6 million in China and are now being sent to slaughter, the New York Times reports.

And they're not alone. Pets who rise to popularity during pop culture crazes can't be the big new thing forever. The final result tends to be lots of homeless animals.

Here are some other pets who suffered the fate of the Tibetan mastiff.

Following Harry Potter mania, people who got owls started finding them not quite as magical as Hedwig. Perhaps they had a lack of imagination: Owls are incredible creatures who can rotate their heads 270 degrees and fly silently through the air. But after the Harry Potter fad was over, so was enthusiasm for the owls, and people began abandoning their owls to the wild. "People saw ­Harry's owl in the movies and thought how cute and cuddly they looked," Pam Toothill at the Owlcentre sanctuary in Wales told The Mirror. "Now they are bored and fed-up with all the work involved [in] looking after an owl."

After the re-release in the '80s and '90s of the 1961 Disney animated feature "101 Dalmatians" and the remake in 1996, demand for Dalmatians soared, the New York Times reported. The year after the remake, shelters were filled with the dogs. The takeaway here: Adopt a loving mutt needing a forever home.

The fad immediately following the feature film "Finding Nemo" resulted in clown fish (like the film's main character) getting even more imperiled. What many fans may not have realized is the saltwater fish species involves more complicated care than a goldfish. "Keeping a fish is entirely the same responsibility as a dog or a cat," Helen Kennedy of The Aquatic Centre in the U.K. told the BBC, which pointed out the irony that the movie, despite its message of fish freedom, resulted in a greater interest in keeping fish in aquariums. "If you don't want to put the time and effort into keeping marine fish then it's actually quite difficult and it's best not to bother."

By the time Elle Woods entered the law profession, Chihuahuas were already so last season. The Chihuahua craze followed the 2001 film "Legally Blonde," and its sequel in 2003, which featured Bruiser the Chihuahua as Elle Woods's loyal companion through LSATs and final exams. Boosted by tiny-dog-owning celebs like Paris Hilton, Chihuahua mania was largely localized to Californians, but loyalty to the loyal dogs didn't last long: Chihuahuas, who have widely varying personalities depending on inherited genetics, made up 30 percent or more of the dog populations at shelters in California by 2009.

"There really is no such thing as a teacup pig, micro-mini, Juliana, etc.," executive director of PIGS Animal Sanctuary Melissa Susko told The Dodo. "Miniature pigs are mini compared to a domestic farm pig that can reach 600-plus pounds. So-called teacups are actually potbellied pigs who are either underfed to stunt their growth or who are sold under false pretenses."

One such case was Esther, who was sold as a "micro pig" to Steve Jenkins and Derek Walter. But then she grew and grew. By year two, she weighed 500 pounds. Instead of casting her aside, Steve and Derek changed their lives to start a farm animal sanctuary, giving Esther the life she needed. 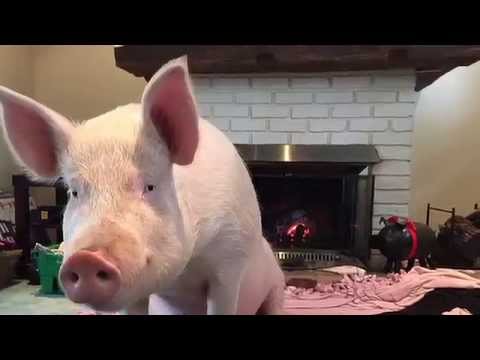 CORRECTION: This story has been updated to show that clown fish are saltwater fish, not freshwater fish.