The Tragic Truth Behind 'Alien-Like Creature' Caught On Film

Malaysian social media was abuzz over the weekend after footage emerged of a "strange" creature crawling through the ruined forests of a palm oil plantation, leading to speculation that it was alien in origin. Experts, however, say that this isn't an exciting otherworldly discovery - but rather a sad testament to how life on this planet is treated.

As the Borneo Post reports, plantation workers were shocked to encounter a clawed, hairless animal while working in palm fields near the village of Sibu. Unsure of just what it was, they turned to violence.

"None of us has ever seen such thing. One of us then hit the animal until it appeared to have passed out," said one of the workers. "It could be a rare species of bear. When it regained consciousness, we forced it to go back into the jungle."

Video shows the "strange creature" struggling over a pile of dry palm fronds, fleeing the people who attacked him. 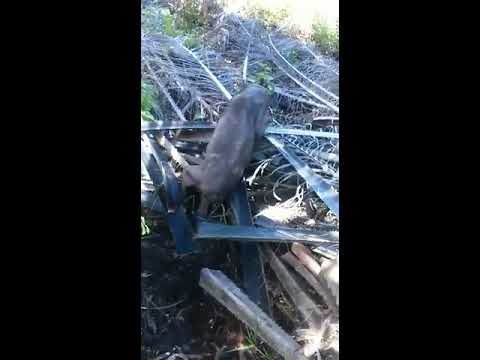 Some have dubbed the mysterious creature a "Malaysian Chupacabra," but Anthony Sebastian of the Malaysian Nature Society Kuching says the animal is actually a familiar threatened species.

"It is clearly a sun bear," Sebastian told the Malaysian Star. "What confuses people is the lack of fur. It is not some strange alien that has fallen from the sky."

State wildlife authorities from Sarawak Forestry Corporation confirmed to the Borneo Post that the animal is indeed a sun bear, adding that he may have been driven to the plantation due to flooding nearby.

Conservationists from the conservation group Naturetalksback condemned the attack on the bear, who had likely "lost its fur either from disease or because it was abused/shaved."

"A local endangered bear gets the living daylights beaten out of it, is filmed, and paraded on the interwebs as a 'freak of nature' or a 'monster,'" the group writes on Facebook. "This is not right."

Sadly, this is far from the only sun bear suffering because of humanity's destructive tendencies. According to the International Union for Conservation of Nature, the sun bear population has declined by as much as 30 percent in the last three decades, faced with a shrinking habitat as forests are cleared to make room for palm oil plantations.