Another orca is pregnant at SeaWorld, and animal advocates say that she is way too young to be breeding. A video showing a pregnant orca, Kalia, undergoing an ultrasound at SeaWorld San Diego confirmed that the nine-year old whale is pregnant. 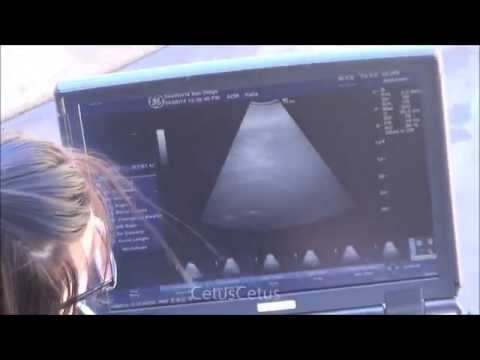 Due in December of this year, Kalia's calf will become the 11th whale living at the park. Scientific studies say that the average age in the wild that females begin to reproduce is 14.9 years. PETA Foundation Director of Animal Law Jared Goodman released a statement about Kalia's pregnancy:

Kalia, the daughter of Kasatka, who infamously almost killed her trainer by dragging him to the bottom of a tank repeatedly, is far younger than an orca who would give birth in nature. Yet SeaWorld, in its infinite greed, has bred another marine mammal who will be condemned to a nonlife in a concrete tank, never permitted to engage in what is natural and pleasant and never given the opportunity to swim great distances in the open ocean, spend time with family, or express any other types of normal behavior. Instead, to draw visitors to its amusement park, SeaWorld will put this baby through constant stress and the privations of captivity-the same dreadful fate as that of the eight orcas and 42 dolphins who died at SeaWorld San Diego alone between 1985 and 2010.

Kalia joins the ranks of several other SeaWorld orcas who have been bred at young ages -- an orca named Katina first became pregnant at SeaWorld San Diego at about six years old, while another named Takara gave birth to her first calf at age 11. Yet another, Kalina, gave birth to her first calf, Keet, when she was only seven. And an orca named Kohana was only eight when she had her first calf, Adan, and then birthed a second calf less than two years later (661 days). This short time between births is not natural, notes Ingrid Visser, founder and principal scientist at the Orca Research Trust.

"A female killer whale requires a 17 month gestation period, followed by a 3 year nursing period in which it must remain with its calf," Visser told The Dodo. "Thus, at a minimum, a female killer whale requires over four and a half years in order to effect a proper birth and nursing period. [It's] abhorrent, yet sadly typical of SeaWorld parks and the industry that they would breed this female so young and so soon after giving birth to a previous calf."

Kalia also has a history of dominance and aggression, especially towards a male whale named Ulises, whose sperm was used to artificially inseminate her.

SeaWorld declined to comment on Kalia's pregnancy, but spokesman Fred Jacobs noted that a 2013 study in Marine Mammal Science documented wild orcas giving birth at 11 years of age, with a mean of 13 years (though Kalia is only nine). He also said that this website "indicates that some females have given birth as soon as 9 years of age."