So when I was looking through Russ Rector's cache of FOIA documents last month, in particular the documents related to SeaWorld's January 1992 application for an emergency permit to transport Tilikum to SeaWorld Florida, this jumped out at me:

Ten minute videotape? That would be worth seeing. I flagged it for Russ, and he immediately updated his FOIA request (which had been for documents) to include video. And, sure enough, NMFS located and digitized the video and released it.

Russ also shared the video with CTV News in Vancouver, which published a segment showing Tilikum in the module. But the whole video, presented below, is definitely worth viewing. It was made by SeaWorld to argue its case for an emergency permit, and that argument was detailed and analyzed here on The Dodo last month, so the video's narrative argument will not be addressed here. 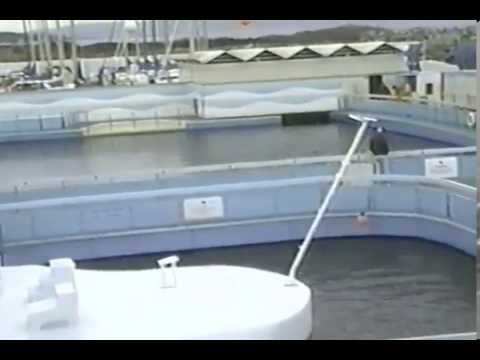 1) This is the best view I have yet seen of Sealand's facility, and its various pools, including the module. In addition, you can seen how tightly surrounded by a major marina Sealand was, which adds to our understanding of what life at Sealand might have been like for Tilikum, Haida and Nootka.

2) There is a very good view of how the module and its gate was connected to the main Sealand pool. And you also get a sense of how small the Sealand main pool was (just 100 feet by 70 feet) for three killer whales.

3) There are some good shots of Haida's newborn calf, Kyuquot, swimming in the main pool.

4) There is an extended shot of Tilikum quarantined in the module. This is the best footage of the interior module I have come across, and you also get a sense of how small it was for him. So small, in fact, that he is forced to surface rest the entire time. And you can see how the skin around his blowhole, which remains above the surface, is drying out (a point SeaWorld used to argue his health was at risk at Sealand).

5) At the end of the video, after documenting how inadequate Sealand was for Tilikum, SeaWorld cuts to an aerial view of SeaWorld San Diego's relatively expansive pools. The not-at-all-subtle suggestion is that SeaWorld is a 5-star facility compared to Sealand, and a beautiful future awaits Tilikum if only the National Marine Fisheries Service will grant the emergency permit. Well, we know how that worked out. And it is also worth asking whether Tilikum's current existence is really that different from how he looks in SeaWorld's video, cooped up alone in the module.