In order to help protect the shark population, a team of scientists recently did an ultrasound on a tiger shark for the very first time.

In the past, researchers would have to cut open a shark to determine whether or not she was pregnant. "We aren't sacrificing humans to determine if they're pregnant, why can't we do it for sharks," one of the scientists on the team said in a video about the experience.

Once the tiger shark, named Emily, was safely in place, the team was able to get a clear sonogram picture ...

... which revealed she was carrying 20 healthy babies, each around 40 to 45 centimeters long.

Twenty shark babies, all being carried at once. Imagine that.

In the sonogram, you can actually see each baby's set of teeth, clearly defined.

Emily is about two thirds of the way through her pregnancy, based on the size of the babies, and only has a few months more before she'll finally give birth.

The team put a tracking tag on Emily, which will fall off naturally in about a year, so they can see where she gives birth and protect that area to ensure that her babies survive.

Once they had finished looking at the ultrasound, the team disconnected it and set Emily free, excited for the day when she finally gives birth to her 20 babies.

Check out the full video below: 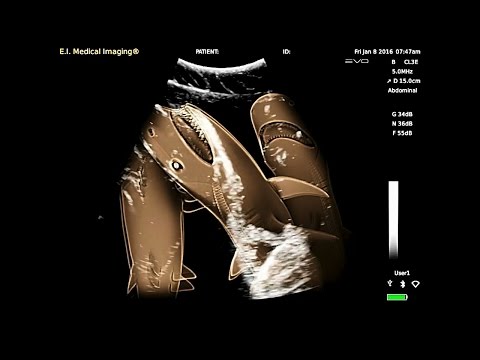