Thousands Of Wild Deer Rule The Streets Of Japanese City

Welcome to the city of Nara, where the deer are free-roaming, happy, and very, very plentiful. There are about 1,200 wild sika deer that have free range of Nara Park, a public park in the city of the same name. Clearly, they also have some free range in the city itself: 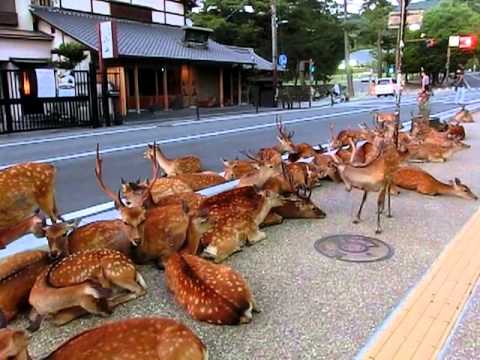 The story of Nara's deer is a long one - according to Noboru Ogata, a professor at Kyoto University's Graduate School of Environmental Studies, the animals have been wandering around the city for centuries. Since as early as the 12th century, the deer have been considered a symbol of luck. According to Ogata, a nobleman named Fujiwara Kanezane was famous for chronicling the area at the time, and wrote this passage about the animals in his diary:

On our way to the shrine, many deer appeared in the morning darkness. This is a sign from the gods and a good omen. People say that when one encounters deer, he or she should get out of the carriage and bow to them.

The deer became symbols of deities, and were treated as sacred. They were strictly protected - killing one could even be punishable by death.

While the divinity of the deer was denounced after World War II, they are still protected from harm and treated as something of a national treasure. And the tradition of visiting them is just as alive as ever. Tourists flock to the city and its famous deer, bowing to them and, miraculously, the deer bow back. It's not clear whether they want to show reverence to their human visitors - or just the crackers in their hands.