The Worst Oil Spill In Trinidad's History Is Killing Animals

Since December 17th, the Trinidadian state-owned oil company Petrotrin has admitted to 11 oil spills in the Gulf of Paria, off the western coast of the island of Trinidad. They are, collectively, the worst oil spills in the history of Trinidad & Tobago (a government representative estimated 236,250 gallons were spilled). But exactly how bad the spill is, and how much harm it will do, remains unclear.

The sea off the coast of Point-a-Pierre, where the oil was spilled last month, includes a mangrove forest, home to a wide variety of species found nowhere else. Trinidad is closer to the mainland than other Caribbean islands, and boasts monkeys, deer, the rare silky anteater, crocodiles and a diverse array of birds. "Where there should be an abundance of crabs and snails there are none, except for a few oil slicked survivors," writes Marc de Verteuil of Papa Bois Conservation, one of the issue's most outspoken activists, in an email. "Even the ever-present mosquitos, which should descend by the hundreds, are gone."

De Verteuil and others describe fishermen with boats covered in crude oil, a sheen of oil on the beaches, and a powerful smell of hydrocarbons. Fisherman say they are having trouble breathing. Dead fish and crabs wash up on the beach. Even worse, the tidal floor is at stake -- because of the use of controversial dispersant Corexit 9500, the same likely poisonous material used in the BP oil spill cleanup. Corexit "damages the insulating properties of seabird feathers more than untreated oil, making the birds more susceptible to hypothermia and death," says the Center for Biological Diversity. Corexit is also highly toxic to sea turtles, of which Trinidad & Tobago has many as it's an important nesting spot for leatherback, hawksbill and green sea turtles. 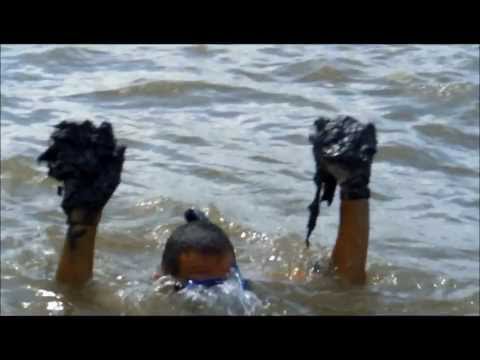 Many animals, from fish to crocodiles to Trinidad's national bird, the scarlet ibis, have evolved to live specifically in mangrove forests. A 2010 study from NOAA found that oil spills kill the mangrove trees themselves, effectively eliminating the ecosystem from the ground up.

It is difficult to find out exactly what the situation is in Trinidad. Trinidadian politicians have categorized Petrotrin's reaction to the spill as "a cover-up" and de Verteuil's own interaction with the company was inconclusive:

"On 22 December I made my first visit to one of the oil spill sites at La Brea," he writes. "Immediately I found two dead, oil slicked pelicans and shortly after that I encountered a Petrotrin worker carrying a heavily oil slicked laughing gull." De Verteuil took a picture of the gull, which made the front page of the Trinidad & Tobago Daily Express. Petrotrin responded to the publication claiming that only one bird -- the gull photographed by de Verteuil -- was affected, "plus a few catfish."

At first, Petrotrin insisted the spills were the result of "sabotage," until a report published earlier this month surfaced indicating that the oil wells were largely unmanned and hadn't undergone a major inspection for 17 years. Petrotrin said on December 30th that the final bit of cleaning would take less than a week, but the scrubbing of hundreds of thousands of gallons of crude oil from a mangrove forest is a huge undertaking. A 1987 oil spill in the mangrove forest of Bahia las Minas, Panama, though bigger than the Trinidadian oil spill, resulted in a stunted and shrunken forest, a dearth of wildlife, and an explosion of destructive algae, beginning within three months and continuing for years. If an oil spill amongst mangroves isn't dealt with effectively, it acts like an atomic bomb, soiling the ground for the future.