With their floppy ears, dangling trunks, and soulful eyes, one's heart can't help but melt at the sight of a baby Asian elephant. While watching a young elephant play, it becomes clear that they behave just as a toddler might. They splash around in the river like a small child would do in the tub, they go out and explore (while staying close to mom, of course), and they have an untarnished love of life and innocence that most of us had before realizing the dangers of the world ... and sadly, just like us, there are plenty of obstacles Asian elephants must face.

Elephant tourism is currently one of the biggest, and most profitable attractions in Southeast Asia. People come from all over the world to cross "riding an elephant" off of their bucket list. But what many of these tourists don't realize is the devastating truth behind this corrupt industry.

Most of the "domesticated" elephants that tourists ride, pose for photos with and take on treks were victims of an outdated practice called the "phajaan" which means "the breaking of the spirit." During this process, young elephants who were either taken away from their mothers in the wild by poachers or who were born into captivity are locked in a small pen, tied up, starved, and beaten into submission. The devices used to "break" the elephant can differ, but one of the most common is a bullhook. These sharp metal objects are also used in circuses and are meant to hit the elephants in the most sensitive areas of their bodies including their head, mouth, shoulder, and behind the ears where the skin is paper thin. The pain is excruciating. This unjustifiable torture can last from several weeks to several months. Without their mothers there to protect them, the juvenile elephants soon lose hope and are eventually deemed successfully "broken." So what's the purpose of all of this? To instill a fear in the elephants that will last a lifetime. The mahouts are then able to control their elephant by just carrying the bullhook with them, but many continue to hit their elephant throughout its daily routine as a reminder of who's in charge.

You may also choose to watch this short and informative video regarding the current status of the Burmese elephants that also includes a clip of what the phajaan typically looks like, via The Smithsonian. 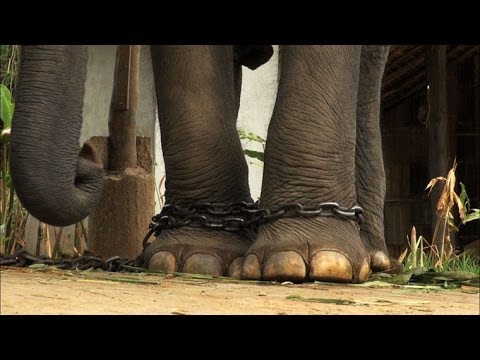 There are also many young elephants who are dragged to street markets and local beaches to beg for money. Tourists flock to these adorable animals; wanting to take pictures with them and sometimes even climbing on their back for a short ride. It seems innocent enough however without even realizing it millions of people are helping to fund poaching.

Elephants in the tourism industry aren't usually bred. This is due to the fact that elephants have a long gestational period and a very low birth rate in captivity, meaning the elephant this woman is posing with was almost undoubtedly taken from the wild. Capturing wild elephants is illegal, but because of some strategically developed loopholes, many young elephants are smuggled into captivity. It's estimated that anywhere from 50 to 200 wild baby Asian elephants are caught and transported from Myanmar to Thailand every year and as the demand for these animals increases that number will only go up.

Several methods are traditionally used to capture wild elephants, for example the "pit-trap" method, whereby a herd is corralled using domestic elephants, into a corridor where a pit has been dug. However, these methods result in high elephant injury and mortality rates. Recently, with the change in market demand for infants and juvenile elephants, as well the greater availability of firearms, poachers in Myanmar are reportedly increasingly using automatic weapons as part of the "pit-trap" approach. Mothers and female minders are often extremely protective of wild infants they are guarding, making it difficult for the poachers to capture them. Using automatic weapons, the protective members of the herd can be easily killed and the infants removed. The body parts from the slain individuals can then also be sold for profit.

By giving money to these "beggars" you are not only making elephant tourism a more lucrative industry but also promoting the wild capture of baby elephants. In Thailand alone, there is an estimated population of 3,000 to 4,000 elephants who are being used for tourism attractions - that's not including the other 12 countries these animals are native to.

And while their babies are being illegally caught and sold, the rest of the population is having to fight rapid habitat loss due to deforestation and male Asian elephants are being poached for their tusks. At this rate, Asian elephants could be extinct in the very near future - easily within our lifetime.

Now that you're probably thinking I ruined your plans to interact with elephants on your next trip to Southeast Asia, I must share that there are in fact humane ways to observe these breathtaking animals. As you can imagine, elephants are not the easiest animals to take care of so several reputable sanctuaries have been created where rescued and retired elephants are able to live out the rest of their lives in peace and without fear. One of the most important aspects of these facilities is that they only use positive reinforcement, such as food, when interacting with the animals. Instead of getting an elephant to walk by beating it, sanctuary staff can simply hold out a piece of fruit in the direction they want the elephant to go. Many elephants have free range of their new homes and don't need to be moved around.

Most of these places offer programs for tourists to come and visit the park for a day or to volunteer for an extended period of time. Day visits are extremely affordable and volunteer projects are customizable to your budget depending on how long you want to stay. Either way, it's a great opportunity to learn more about these majestic creatures while also donating to a great cause.

So let's review how you can be a responsible "ele-friend."