The Horrors Of The Dairy Industry

The look on people's faces when I tell them I'm vegan. Honestly, you'd think I'd just risen from the dead and walked on water. Sure, perhaps us vegans are hippy, tree-hugging, peace-lovers, but we do have our reasoning. When people say "there's no harm in consuming milk, it's a natural process for a cow" I try not to roll my eyes; I was naive once too and passing up on a biccy and a big glass of milk was damn rare! But what your carton labels are failing to tell you is that when you pop to the supermarket for a pint of semi-skimmed, you're actually buying into a colossal-scale cycle of animal cruelty. I'll break it down for you.

In order for any animal to produce milk they have to get pregnant, right? But when it comes to the dairy industry, romance really is dead. "Artificial Insemination" - that's what they call the process of physically restraining and impregnating a cow. What does this involve? Having reached into the cow's rectum as a means of positioning the uterus, a metal instrument is then forced into the vagina. Of corse, no harm should become of the cowards that conduct the AI. Harry Harlow: a sick and twisted man, invented the "rape-rack," a device used to restrain cows from lashing out. Rape-rack. I think this speaks for itself.

And when any animal gets pregnant they give birth, right? But when it comes to the dairy industry, it's not all happy families. At the moment of a mother's birth, her calf is immediately taken and dragged away - an unbelievably stressful affair for both calf and cow. Animal Biologist Daniel Weary has proven that like us humans, cows are emotionally sensitive and when separated they often cry out in search of one another.

Now, any animal that gives birth produces milk for the sole reason of feeding their young, right? But when it comes to the dairy industry, all over the world billions of us are eagerly waiting to get our hands on it too. As if the trauma of separation wasn't enough, female cows are then hooked up to milking machines. Machines significantly more uncomfortable than the natural act of suckling their young. And in order to meet the demand of a greedy milk-obsessed nation, these cows are selectively bred and drugged. Due to cramped, squalid factory conditions and high-consumer demand, antibiotics and bovine growth hormone (rBGH - banned in the UK) are used excessively in dairy farming - which I'd argue imposes a serious public health issue - as a means of fighting infection and increasing milk production. Once drugged, these cows bloat and produce up to ten times the amount of milk than they would naturally.

When these machines have pumped dry, cows are permitted one or two short months rest until the long, grueling process begins again. Unless, surely there's hope for those cows who have grown old and infertile? Can they retreat to the comforts of a lush, green field? Not a chance. Dairy farmers brand these cows useless and send them to slaughterhouses only for their meat to be packaged and sold as hamburgers or pet food. Ladies, imagine being dosed to high heaven with antibiotics and growth hormones, forcibly impregnated, compelled to give birth, only to have your child instantly removed from your care. Incomprehensible!

What happens to the calves then? Well unfortunately, female calves share their mothers' fate. Male calves on the other hand can't produce milk. "Yippee, send me packing, I'm free!" Not quite. Because we are a nation which thrives on profit and exploitation, dairy farmers have partnered up with the meat industry to ensure that no cow escapes unscathed. These calves are destined to end up on your plate. "Veal or beef?" asks the waiter. "What's the difference?" Well, veal meat belongs to a calf only a few months old at the time of slaughter. More so, veal calves outside of the EU often spend their lives confined to tiny, cramped crates designed to prohibit exercise and muscle-growth. Calves bred for beef on the other hand reach an age of four or five, max. Consider this: a cow's natural lifespan is around 25 years. 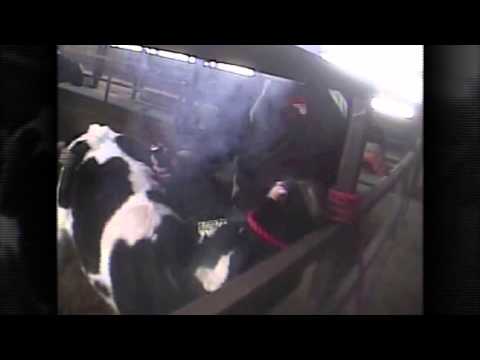 Is it natural for a calf to feed on its mother's milk? Yes. Is it natural for a human to do the same? No. Do you still breastfeed? No. Would you get down on your hands and knees to feed from an animals udder? I should hope not. Besides, supermarkets are stocked with so many alternatives just waiting to be scooped up and taken home. Soy, almond, rice, hemp. "Pick me, pick me!" Chocolate, vanilla, strawberry, coconut. You name it, they've got it. I know the transition from dairy to zero seems daunting but trust me, if you pick your morals wisely you'll never look back. They say the world is your oyster. I say it's the dairy-free aisle.