Dr. Naomi Rose, a marine mammal scientist at the Animal Welfare Institute, gave a TED talk last month titled "Let's Throw Shamu a Retirement Party!" In the talk, which was released this week, Rose outlines the tight family ties at the heart of orca society - bonds that marine parks like SeaWorld tear asunder.

Here are seven ways, according to Rose, in which captive orcas suffer socially.

"Orcas have their cultural identities stripped from them in captivity."

Like humans, orcas form remarkably unique cultures based on where they live. Each population has a different diet and a different language. "These are learned, cultural differences," Rose says. In captivity, their native cultures are ripped away from them, and they're either kept alone or with orcas from completely different groups who speak different languages and have little in common with them.

Family is everything - but not at SeaWorld.

"The most remarkable thing about orcas is their families," Rose says. In many wild pods, males and females will spend their lives with their mothers. "As for sons, they will spend up to 70 percent of their time within one body length of their mother until the day she dies," Rose says. Even in pods where the children go off on their own as adults, they still come back to visit. In marine parks, families are rarely kept together.

In the wild, it's taboo for orcas to mate with their immediate family. Though they often spend their lives together, the males travel outside the pod to mate. On the rare occasions when orca relatives are are kept together in captivity, the result is unnatural.

Captive females are bred as children.

"Young females are bred far too early, when they're physically but not socially or emotionally ready," Rose says. "They are children having children ... and so they sometimes reject their calves."

The good moms have their kids taken away.

Some captive females have raised their children "devotedly," Rose says, but aren't rewarded for it. "Many times her calves are taken from her to be shipped to some other facility for management purposes, when they're still profoundly dependent on her, sometimes when they're as young as two or three years old," she says. "That's exactly the same as taking a toddler from his or her mom."

"They grow up without knowing proper social etiquette," Rose says of orcas bred in captivity, who are isolated from the crucial social support system that orca family provides. "Males...can be violent when mating," she notes. "Dominant females can assert their dominance with unnatural violence."

In 1989, an orca named Kandu violently attacked another orca at SeaWorld San Diego, breaking her own jaw and severing an artery. She died within minutes, blood spurting from her blowhole and staining the water while her year-old calf swam frantically around her.

"This level of aggressive interaction's never been observed in the wild," Rose says.

This violence can be directed against humans.

"Adult males without familes have no social status, no social protection, no social role other than stud," Rose says. In the case of Tilikum, the orca featured in "Blackfish," "his life has been one of unending frustration." Tilikum has killed three people so far.

There's never been a recorded incident of a wild orca killing a human.

"We all have family," Rose says. "How can it be morally right for us to do to others, even when those others aren't human, something we would consider devastating if it happened to us? That comparison isn't anthropomorphism. It's empathy."

For some fascinating facts about orcas' family structure, watch the full video below: 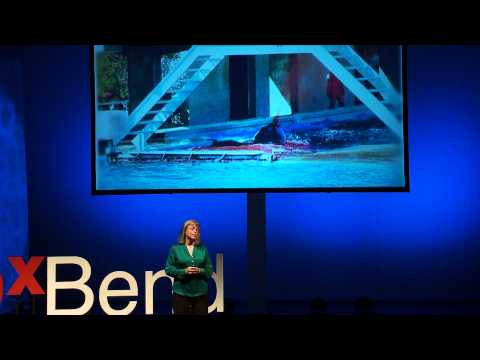