UPDATE: Eighteen elephants are now slated to be shipped from Swaziland to U.S. zoos after an American judge ruled in the shipment's favor, amid international protests.

At a time when African elephants are being poached to the brink of extinction - experts say nearly 100 are killed every day - it's hard to fathom that any place in the world would complain of too many elephants.

But in the Kingdom of Swaziland in southern Africa, the managers of two wild animal reserves - the Hlane Royal National Park and Mkhaya Game Reserve - are saying elephants have stripped the landscape bare with their voracious appetite for greenery.

The managers also say the parched land cannot support both elephants and other animals, like critically endangered black rhinos and white-backed vultures, so they have captured 18 elephants - out of the country's total population of about 40 - and herded them into a holding area. The managers of the reserves (which are part of a consortium called Big Game Parks) plan to ship the elephants 9,000 miles away to Dallas, Texas, perhaps as early as next month. From there they will be transported to zoos in Dallas; Omaha, Nebraska; and Wichita, Kansas.

The 18 elephants will be shot if they cannot be relocated to American zoos, according to the parks' public permit applications.

The shipment is not yet a sure thing, however. Any such import must be approved by the U.S. Fish and Wildlife Service, the agency that administers the Convention on International Trade in Endangered Species (CITES). Buying and selling African elephants - live or in the form of ivory trinkets - is prohibited under CITES, but the Dallas zoo and its partners have requested a permit under an exception that allows endangered animals to be traded as long as they "will not be used for primarily commercial purposes."

The three zoos - the Dallas Zoo, Omaha's Henry Doorly Zoo and Wichita's Sedgwick County Zoo - appear confident that permits will be granted and are already celebrating the anticipated elephant arrivals. Each zoo plans to take six elephants, which will allegedly allow them to build "large social herds," just like in nature, and bring new blood into the American zoos' breeding programs. 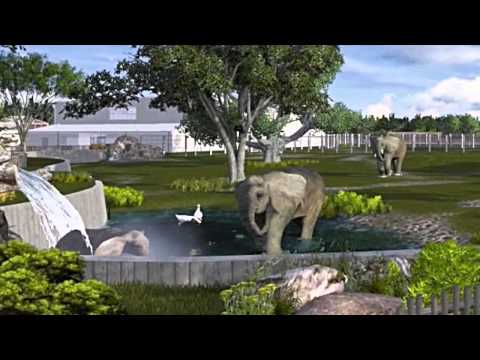 Now, the zoos are busy preparing for the new animals. The Sedgwick County Zoo is building a five-acre habitat that will include "the world's largest pool for elephants." Omaha's zoo is creating a new "African Grasslands" exhibit, with "extensive use of grasses, acacia-like trees," and "breathtaking panoramic views ... teeming with African wildlife." And Dallas boasts of a habitat with "wallows, watering holes," and a "custom-built African fig tree," according to the zoos' various websites.

The zoos will pay $450,000 over the next five years to support the reserves' rhino conservation efforts. "This is win-win for both species," Dennis Pate, president of the Henry Doorly Zoo, announced in a press release.

But many animal welfare and conservation groups disagree, saying it's unethical to separate elephants from their families and banish them to a life in captivity. In a statement released last month, 75 scientists and other experts - including Cynthia Moss of the Amboseli Elephant Research Project, Paula Kahumbu of WildlifeDirect and Joyce Poole and Petter Granli of ElephantVoices - cast doubt on the claim that removing the elephants would be in the best interest of the elephants or the black rhinos in the area. The experts, representing 23 different organizations in at least 10 countries, including the United States, England, South Africa and Kenya, said elephants cannot thrive in zoos and shipping animals abroad is not supported by responsible wildlife management practices.

"Certainly, this proposal will not provide any conservation benefit in the U.S. or Swaziland," the experts said. And for these 18 elephants, "it is no exaggeration to conclude that they face a sad, uncertain future." (The three zoos did not respond to requests for comment by press time.)

Conservationists and animal welfare groups are especially concerned because this would be the second shipment of Swazi elephants to the U.S. in a dozen years. In 2003, 11 elephants from the same two reserves were exported to two U.S. zoos, amid rancorous protests and a failed legal challenge.

That first group of Swazi elephants in 2003 landed at the Lowry Park Zoo in Tampa and the San Diego Wild Animal Park (now called the San Diego Zoo Safari Park). Seven of the 11 elephants, however, have since been moved again to different zoos.

Now, Big Game Parks is again looking to send elephants to U.S. zoos. So, though these zoos seeking to import elephants from Swaziland today claim to be creating naturalistic matriarchal herds as found in the wild, in reality, the common practice among zoos has been to shift animals around, breaking up families who, in nature, would remain together for life.

Keith Lindsay, a conservation biologist with the Amboseli Elephant Research Project, warned, in a letter to the Fish and Wildlife Service in 2003, that the shipment would set a dangerous precedent for the Swazi parks and other small reserves to "become production farms for the international zoo market."

Conservationists now fear Lindsay's prediction is coming true. "Are we going to allow this to happen in perpetuity?" Adam Roberts, CEO of Born Free USA, told The Dodo. "Is Swaziland no more than a breeding center for American zoos?"

How things used to be

Fifty years ago, there were few wild animals in Swaziland, and no elephants at all. The lions, zebras, wildebeest, impala and nearly everything else had been shot and poisoned by the thousands by white settlers - game hunters and cattle farmers who wanted to clear the land for their own herds and considered the native fauna to be pests.

In the early 1960s, a young Anglo-Swazi named Ted Reilly transformed his family's 1,100-acre farm into a wild animal reserve, transporting animals - including zebra, kudu, impala and waterbuck - from neighboring South Africa and Zimbabwe. Before long, Reilly was managing three reserves - his original farm, the Hlane Royal National Park and the Mkhaya Game Reserve. The three reserves are still managed, under a mandate from Swaziland's King Mswati III, by Ted Reilly and his son.

Swaziland's elephants were brought in from South Africa's Kruger National Park, the orphaned survivors of a series of culls in the 1980s and 90s. Today those orphaned elephants and their descendants are kept in separate enclosures within the Hlane and Mkhaya parks, surrounded by strong electric fences. And that, conservationists say, is the beginning of the trouble.

"You get problems with elephants if you enclose them in too small a space," Frank Pope, chief operations officer of Save the Elephants, told The Dodo. "They get too constrained and they do cause a lot of damage."

Swaziland is a small country - smaller than Massachusetts. The Hlane and Mkhaya parks cover roughly 54 square miles and 25 square miles, which is also small by the standards of African conservancies; Kruger National Park is bigger than the whole of Swaziland. And the elephant enclosures occupy just a fraction of that - just 6 percent and 19 percent, respectively, of the total reserves.

So "when Swaziland says there are too many elephants," Pope suggests, "it's likely the case that it's too small an area." Better conservation practices, Pope points out, call for larger spaces: opening corridors to connect elephant ranges, rather than fencing them in to confined safari parks.

Lindsay, who has more than 30 years of experience in elephant conservation, says that even given Swaziland's limited space, it's disingenuous for the Big Game Parks to claim elephants are endangering rhinos and vultures.

"The dishonest thing about all this," Lindsay told The Dodo, "is that elephants are not affecting most of the parks." The vultures - which nest in the canopies of mature trees - may be finding fewer nesting spots in the elephant areas. But there is no shortage of thriving mature trees on the other side of the elephant fences. And vultures, after all, can fly. 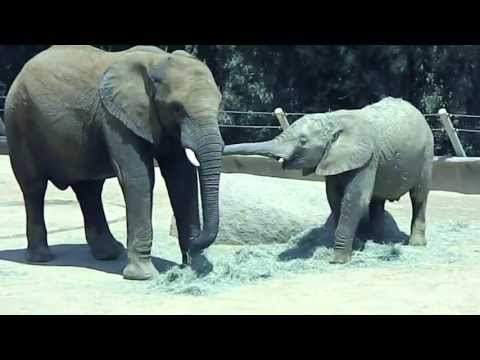 As for rhinos, only Mkhaya has black rhinos, and only black rhinos compete with elephants for food. (White rhinos are grazers, and are not affected by elephants' rapacious appetites for trees and shrubs.) Hlane's white rhinos, therefore, gain little from the removal of elephants. And in Mkhaya, Lindsay suggests, the conflict could perhaps be eased by moving the rhinos out of the elephant enclosures and into the much larger surrounding parkland.

Opponents of the export are particularly dismayed at the Big Game Parks' claim that the only options for the elephants are captivity or culling. Culling of elephants was once a routine population control practice, but no African country has culled elephants for two decades. "The attitude of the public is simply against it," Lindsay says.

Lindsay and other critics also suggest that the threat to shoot the elephants is a tactical move meant to pressure the Fish and Wildlife Service to approve the transfer. "The Reillys say they can't put them back with the rest of the elephants. But of course they could," Lindsay says. "It's like a hostage situation."

But what can be done?

Conservation groups, including groups based in Cameroon, Kenya, South Africa and elsewhere on the continent, have been rallying around the slogan, "African elephants belong in Africa." And it seems Reilly wouldn't have to look far to find a home in the wild, and very nearby. There are four additional wild animal reserves in Swaziland, managed by the quasi-governmental Swaziland National Trust Commission. Representatives for the parks have said they could accommodate the elephants, but were never consulted, according to the Conservation Action Trust, a South African nonprofit.

The Fish and Wildlife Service has declined to rule on the issue of whether there might be alternatives for the elephants in the wild. The agency's environmental impact statement limits its concerns to whether U.S. zoos can provide adequate care for the elephants and whether the import will have a detrimental impact on the survival of the species. The FWS seems to have concluded they can, and it won't.

Public comments on the proposed import, however, are overwhelmingly against it.

For now, the 18 elephants remain in a holding pen and Big Game Parks insists they will not be returned to their herds.

To leave a public comment about whether the export permits should be granted, go here. 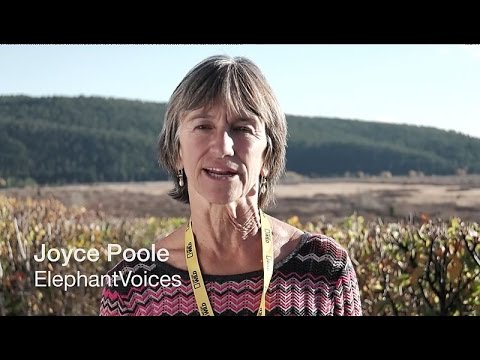 To sign the petition against the important of elephants from Swaziland to U.S. zoos. go here.