South Africa Just Made It Legal To Sell Rhino Horn

This is terrible news.

Just a few weeks after poachers broke into a rhino orphanage in South Africa and killed two baby rhinos for their tiny horns, the country made the domestic trade of rhino horn legal.

That's because John Hume, who owns the world's largest rhino farm (with over 1,000 rhinos he has bred) sued the government to get the 2009 moratorium on the trade overturned - and he won.

Worth more than its weight in gold, rhino horn is made of keratin, which is the same material as our fingernails. But organized crime groups profit from illegally trafficking the keratin from rhino horn across borders into Asia because of the unfounded superstition that it cures everything from hangovers to cancer.

Hume claims that the only way to keep his farmed rhinos safe is to sell their horn to pay for the cost of protecting them. "To me the people who are stopping me from selling my rhino horn and protecting my rhino may as well be joined with the poachers," he said.

The trade of rhinoceros horn has been internationally banned since 1977 because high demand for the horns drives rampant poaching and threatens rhinos with extinction.

"Legalizing domestic rhino horn trade in South Africa opens the door to further illegal exports of rhino horn," Susie Watts of WildAid's Africa Program, told The Dodo in a statement. "There is no domestic demand for rhino horn products and, as the pro-trade lobby very well knows, the reason why the moratorium was implemented in the first place was to prevent domestic trade from being used as a cover for smuggling." 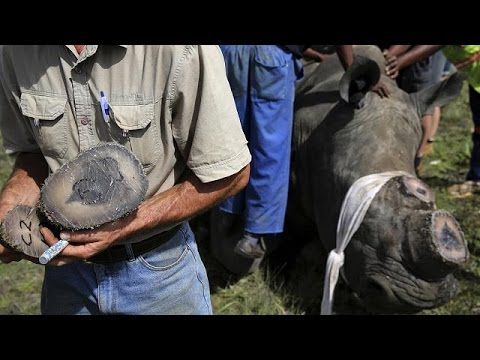 In 2016, an estimated 1,100 rhinos were killed in South Africa, which is home to about 70 percent of the world's rhino population. The year before was even worse: 1,175 rhinos in South Africa were killed for their horns - an average of three rhinos slaughtered every day. It's estimated only about 29,500 rhinos are left in the world.

"There is no realistic way to maintain chain of custody over rhino horns and prevent them from being trafficked abroad," Watts said. "There should be no legal horn market so long as rhino poaching, illegal trade and consumer demand are out of control."

To help end rhino poaching, you can sign a pledge to never buy a product made from an endangered species. You can also donate to Thula Thula Rhino Orphanage.