Some Whales Are Older Than Herman Melville’s “Moby Dick”

Tortoises, clams and koi fish usually top the list of the world's oldest animals. But bowhead whales can certainly hold their own when it comes to long lifespans, as Canadian biologist and photographer Paul Nicklen explains in a short talk about photographing a 50-foot whale. 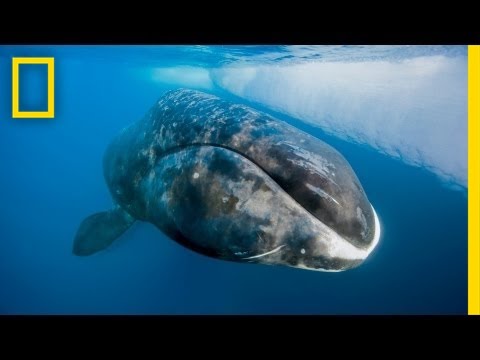 The oldest known bowhead whale was at least 211 years old -- meaning that many alive today likely survived the heydey of whaling, which was banned by a global moratorium imposed by the International Whaling Commission in 1986 (with the exception of subsistence whaling by indigenous peoples). There is even evidence of this -- one bowhead whale caught off the coast of Alaska by Eskimo hunters in 2007 was found with an arrow-shaped fragment lodged in its neck that dated back to around 1880, meaning the 50-ton whale had been swimming since Victorian times.

Happily, bowhead whales seem to be doing slightly better now -- researchers say that their numbers have grown to about 7,000 to 10,000 after they were decimated by whaling. But most of the bowhead whale populations are still endangered, threatened both by subsistence hunting and by ship strikes, fishing gear entanglement, toxic contaminants and climate change, which could wipe out their food source.