Snowboarders Save Stranded Horse From Freezing To Death

By the time this horse was discovered, all alone on a mountainside and up to her belly in snow, she seemed as though she had given up any hope of making it out alive. But in that cold, lonely place, the warmth of human compassion won the day.

Rafael Pease and a friend had planned to spend the day snowboarding in the Chilean Andes, celebrating Pease's 21st birthday, but they soon found themselves in a position to save a life. While shredding through the blanket of fresh powder, Pease spotted what he at first thought was a rock off in the distance. As he looked closer, however, he realized it was actually a creature in desperate need of help.

That's when the snowboarders leapt into action. 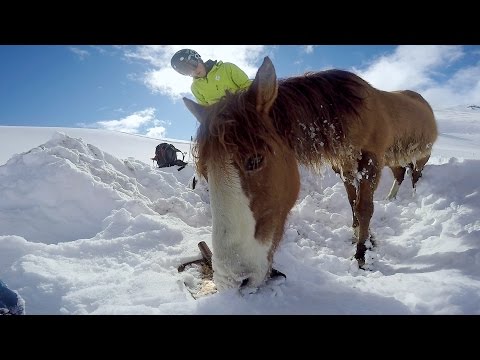 Digging with snow shovels, the pair was able to free the exhausted horse from her icy confines. After feeding her, Pease and his friend slowly led the horse down the mountain where she was reunited with her owner, who informed them that she had been missing for four long days.

If the snowboarders hadn't come along, it's not likely the stranded horse would have lasted much longer. And while riding the slopes might have been a more pleasant way to spend the day, Pease says he wouldn't have had it any other way.

"I have been through a lot in life, and through it all I have realized that it's well worth it to watch out for others - whether they are human or not. And that's what me and my riding partner did," he wrote in a blog post on The Inertia. "Hopefully this inspires you to get out there and not only live your life to the fullest, but to help others do the same."