Cepat the slow loris hasn't had an easy life.

The nocturnal animal was kept as a pet for six months, trapped in an outdoor cage with no protection from the sunlight or heat. Ill from his poor diet and the constant stress of captivity, the tiny creature was finally rescued by International Animal Rescue (IAR).

Cepat has been living at IAR's rescue center in Java, Indonesia, since 2011. While the little loris is finally receiving the care he deserves, he'll never be able to return to the wild - the life he was meant to have.

Cepat's not alone. Slow lorises are being funneled into the exotic pet trade in droves, poached from their homes to meet the ever-growing demand for pet lorises. And what's behind the sudden clamoring for pet lorises? The much-shared videos of slow lorises being tickled, where the little animals put their arms up like they're having the time of their life.

But the truth is, these videos are torture. And IAR, which runs the largest slow loris center in the world, has launched the Tickling Is Torture campaign to raise awareness about how these videos affect lorises like Cepat. Even putting aside the pet demand they create, IAR said, tickling is a nightmare for slow lorises.

"When a slow loris is tickled it raises its arms above its head, not because it is enjoying it but in an attempt to defend itself by accessing a venomous gland on the inside of its elbow," IAR explained in a statement.

The group hopes the campaign can spread the word about the danger these videos pose to the animals involved - and to their cousins in the wild.

"Clips on YouTube showing pet slow lorises being tickled or handfed have led to a clamour from people all over the world to own one of these shy, nocturnal primates, even though they are completely unsuited to life as a domestic pet," IAR said.

To meet this demand, the small animals are being poached from the wild at an extraordinary rate - which could have serious implications for the species' future. Four of the eight slow loris species are classified as vulnerable by the IUCN Red List, one is critically endangered and the remaining three have yet to be classified.

The animals who are taken from their forest homes don't have a happy future - they're forced into tiny cages and fed rice and other inappropriate foods instead of the varied diet they'd thrive on in the wild. "It's no surprise that most of them are malnourished and suffering from serious health problems," Tickling Is Torture campaign head Phily Kennington explained in a statement.

Most cruelly, their captors clip off their little teeth with pliers, without anesthesia. A video released by the Tickling Is Torture campaign, narrated by actor Peter Egan, shows one little slow loris squeaking in pain as his teeth are removed.

The cruel aim of this crude surgery is to remove their natural defenses, and make them more pliable and doll-like around humans so they're easier to market as pets. "Given the chance - and if its teeth are still intact - it would give the person doing the tickling a serious bite," IAR said.

Cepat is a prime example of the harm that captivity can do to slow lorises. Like so many others, Cepat had his teeth brutally removed so he couldn't protect himself. And though he spent only six months in captivity, he developed metabolic bone disease as a result of poor nutrition.

Unfortunately, the slow loris craze hasn't been helped by celebrities who've endorsed their exploitation. Lady Gaga was planning to use a slow loris in a music video last year, but he still had his teeth and bit her on set. The year before, Rihanna posted a selfie with a slow loris, but police used the photo to track down the animal peddlers and confiscated their animals.

IAR is hoping the Tickling Is Torture campaign can stem the flow of poached animals by raising public awareness about the danger of these videos - and the unsuitability of lorises for life in captivity. The group is asking people to sign a pledge promising not to share or like any slow loris videos and to spread awareness about them when possible.

"For the sake of individual lorises and for the sake of the species, the clamour for these primates as pets must be stifled," IAR said.

Cepat, at least, has escaped the pet trade for good - and while he's not in the jungle, he still has a good life. "He is left to sleep all day in the shade and the quiet," Kennington told The Dodo. "Just as he would in the wild." 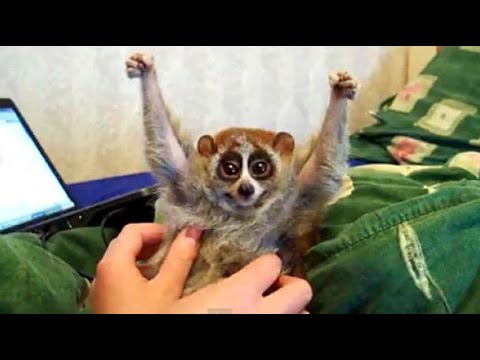