Depressing Time-Lapse Video Shows What SeaWorld Orcas Do All Day

This is what a SeaWorld orca does all day.

A video taken this month by the team from Superpod, an upcoming documentary project, shows a time-lapse clip of one of SeaWorld San Diego's orcas waiting in her tank before a show. For six minutes, the whale can be seen floating listlessly in her little pool, at one point swimming a few yards to the left before continuing to float. The buzzing crowd around her provides a sharp contrast to her motionless waiting.

SeaWorld maintains that floating behavior like this is normal for an orca. In one August PR video, a trainer says of Tilikum: "[Audiences at SeaWorld] might see him at rest, because, you see, like all animals, killer whales do rest."

However, The Dodo spoke with two marine mammal experts at the time, both of whom confirmed that floating like this is virtually unheard of in healthy wild orcas.

"It's very unique to captivity; it's very, very uncommon in the wild," Dr. Heather Rally, a veterinarian who works with PETA, told The Dodo about the constant floating. "It's believed to be the result of chronic stress, boredom and inhibition of natural behaviors that occurs as a result of inadequate living conditions at places like SeaWorld."

And while SeaWorld calls it "resting" and says it's normal, Naomi Rose, Ph.D., a marine mammal scientist who works with the Animal Welfare Institute, told The Dodo that wild orcas remain in motion even while sleeping. It's "extremely rare" for wild orcas to stay still for more than two minutes, she said, though SeaWorld's orcas have been spotted floating for up to three hours.

In the wild, orcas can swim up to 100 miles per day; not only does this floating behavior put whales at risk for sunburn and insect bites, but the lack of activity also makes them much less fit than their wild counterparts. And at the end of the day, it's just one more example of why SeaWorld can't provide a suitable home for captive orcas.

"They're doing something that's not natural," Rose said.

Watch the full time-lapse below. 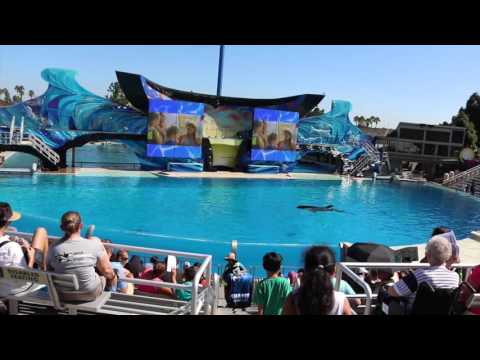