She keeps getting beat up in the tank — and just wants to escape.

Another video has emerged showing a captive orca named Morgan beaching herself on the side of her tank.

Morgan lives at Loro Parque, a marine park in Spain's Canary Islands, with five other orcas owned by SeaWorld. Earlier, a video was published showing Morgan lying on the concrete near her tank after pulling herself out of the water. She reportedly laid there for over 10 minutes.

At the time, Loro Parque denied that the clip showed anything unusual. "The video represents just a few minutes of images of Morgan, right after the end of a regular presentation in OrcaOcean," the park said in a statement provided to The Dodo. "It is absolutely illogical and absurd to assume that the length and the quality of such video would be sufficient to make a conclusion of such nature."

But now a second video has emerged showing Morgan beaching herself once again, reportedly after a performance on February 22.

In this clip, Morgan lies on her stomach in the sun for around nine minutes before a trainer runs up to her and instructs her to get back in the water.

She obeys, sliding back into the water and swimming a lap. But less than a minute later, Morgan returns to the concrete and slides back out again. 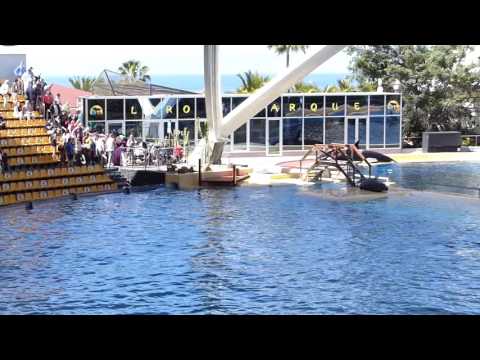 "Her skin dries out while she remains in the sun," video poster Georg Volk wrote in the description. "Anyone can see this is unnatural."

Dr. Ingrid Visser, a noted orca biologist and cofounder of the Free Morgan Foundation, told The Dodo that Morgan's strange, repeated strandings indicate how "fundamentally wrong" her captivity is.

"It is in high-definition and therefore you can clearly see her skin drying out as the time progresses," Visser said of the recent video. "That Morgan was commanded to go back into the water by a trainer (and you will note that all of whom had ignored her during the show) suggests that they expected her to stay up there for a lot longer."

While all of SeaWorld's orcas have their own tragic stories, Morgan's is unique. She was spotted off the coast of the Netherlands in 2010. As she appeared emaciated, she was captured by the Harderwijk Dolphinarium under a rescue and release permit.

But instead of being released, she was then shipped to Loro Parque in a twisted series of legal steps that Visser and others have described as "whale laundering." There, she was taught tricks and now performs for tourists. SeaWorld claims ownership of her.

Loro Parque and others in the entertainment industry have tried to justify their actions by saying she needs to remain in captivity because she is hard of hearing. But several orca experts, including Visser, have said her welfare is being severely compromised by remaining at the park.

Visser said she believes Morgan's behavior is a result of her being attacked by her tankmates. The young orca is frequently bullied - which isn't unusual in SeaWorld's tanks - and has been injured several times. She's also injured herself. Like many captive orcas, she's broken several of her teeth off chewing on her tank. In April, she was filmed repeatedly bashing her head into a metal grate.

"This type of 'escape' behaviour, that this repeat performance demonstrates, indicates to me that Morgan has learnt that the best way to avoid aggression from the other orca is to leave the water altogether," Visser said.

Visser has recorded one other orca at Loro Parque - Tilikum's 15-year-old son, Tekoa, whom Visser describes as "one of the most bitten and raked orca in captivity, worldwide" - beaching himself like Morgan. In the Tekoa video, several trainers can be seen walking by and ignoring the large orca lying on the concrete. 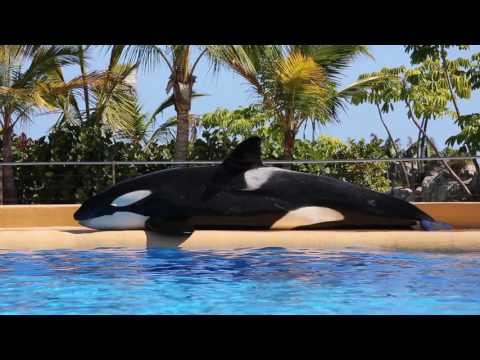 Even if the orcas are escaping aggression, self-beaching is highly abnormal, particularly for a wild orca like Morgan. While a couple populations will occasionally beach themselves temporarily while hunting, wild orcas are constantly in motion, and even swim while sleeping.

There are also health dangers associated with beaching - including overheating, blood pooling and and "other physiological issues," according to Visser.

Orcas also dive hundreds of feet in the wild, meaning captive orcas - whose tanks are no more than a few dozen feet deep - are at an increased risk of sunburn. SeaWorld's orcas have already been spotted with sunburn, and lying out of the water in full sun could increase this risk.

Yet despite the obvious abnormality of a cetacean voluntarily lying motionless outside the water, Loro Parque has defended Morgan's behavior, saying it's perfectly normal and a natural result of the park's training routines.

"This is a totally natural behavior which is often accompanied by dynamic games," Loro Parque said. "To speculate that this represents a sign of stress demonstrates utter ignorance about the natural behavior of this species."

But Visser said the park's response just shows "how distorted their concept of what 'normal and natural' is."

"Nowhere in the [natural] world do orca slide out onto concrete and beach themselves," she noted. '[Morgan] has been kept with the most dysfunctional group of orca held in captivity - worldwide, and her behaviour is a reflection of that."

To help Morgan, you can make a donation to the Free Morgan Foundation, which was cofounded by Dr. Ingrid Visser, through its website. You can also donate to The Dolphin Project to help wild cetaceans worldwide.

You can watch the original video of Morgan beaching herself below: