SeaWorld Blames Kids For Why It Needs Orcas

Still holding captive dozens of orcas, SeaWorld has recently upped its efforts to highlight its animal rescue work in light of continued public scrutiny. But the company is still avoiding the larger conversation animal advocates want to have - about the captivity of orcas and other ocean life.

In a new promotional video, which says that some whales are sacrificed to "controlled science" for the supposed good of the species, SeaWorld says that captive orcas help inspire kids to care about animals.

"These animals in this park can inspire these kids."

SeaWorld cites piquing the curiosity of small children as one of the purposes of the tanked orcas - because kids get to see them up close.

If the goal in exposing children to animals is a better understanding of and empathy for them, the fact that SeaWorld orcas are forced to entertain, kept in tanks for years and split off from their families teaches a different lesson altogether: It teaches kids the natural lives of orcas matter less than seeing them through a pane of glass. This suggests to kids that the natural world is theirs to manipulate for their own enjoyment.

"We love the animals that we're working with."

The very premise of SeaWorld, which was originally supposed to be a restaurant where diners could watch captive ocean life while eating food, was to entertain humans - and that continues to be SeaWorld's main objective. The company's argument for keeping orcas captive is based on the idea that human entertainment is more important than an orca's freedom. As long as people see individual animals as objects, these orcas will never have a chance to touch ocean water.

SeaWorld says animal rights advocates are "lying about the benefits of having these animals in a zoo and aquarium."

That SeaWorld has a history of lying to the public makes it hard for anyone to believe what the company says. SeaWorld tweeted a picture of a mother orca and her calf to illustrate its respect for orca families but neglected to mention that the baby in the picture had been shipped off to Spain. SeaWorld has also lied to the public about dorsal fin collapse and the lifespan of orcas.

So own up to it, SeaWorld. Either admit that you are willing to sacrifice the livelihoods of dozens of orcas for human enjoyment or empty the tanks and turn all your private money and efforts toward rescuing animals and spreading the word that wild animals belong in nature. 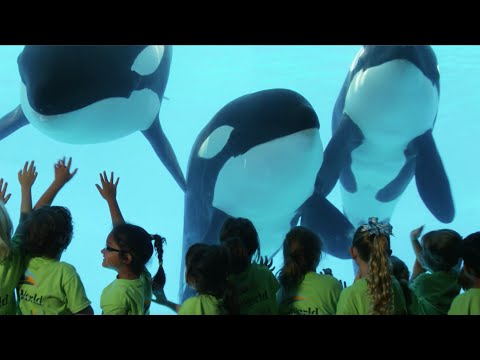