In a video shared by National Geographic on Monday, scientist David Gruber is diving at night near a coral reef in the Solomon Islands when he spots something absolutely magical - a glowing hawksbill sea turtle swimming right in front of his cameras.

That sighting was a historic moment - the first known glimpse of a biofluorescent sea turtle. Biofluorescent means that the turtle's body reflects light from the water and reemits it as a different color - in this case, neon yellow, red and green.

Biofluorescence has never been recorded in a marine reptile before.

Gruber and his team were in the Solomon Islands to find examples of biofluorescence in coral or sharks, but they never expected to find a glowing hawksbill sea turtle.

"It came in front of my lens and then hung out with us," Gruber says in the video. "I wanted to let him go after a little bit. I felt like he came and he divulged his secret."

Now that marine biologists know that turtles are capable of this magic-seeming biofluorescence, the next step is to figure out why they're glowing: Is it for camouflage? Or to communicate with other turtles?

Finding the answers won't be easy, since many species of sea turtles are critically endangered.

This incredible discovery only proves that there is so much more to learn about the animals with whom we share this Earth - and it's imperative that we protect them.

Watch the whole magical encounter below: 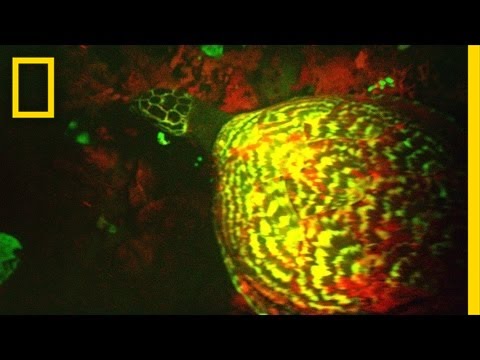