A massive, diverse group of stakeholders that included representatives of SeaWorld and other aquariums, animal advocates and scientists descended on Miami this week to meet with Richard Branson and his companies, Virgin Unite and Virgin Holidays, to discuss the issue of cetaceans in tourism.

Branson and Virgin have been the target of animal activists of late, who say the company's travel deals to marine parks like SeaWorld that hold captive whales and dolphins are helping to support an industry that hurts animals. In February, Whale and Dolphin Conservation (WDC) released this video: 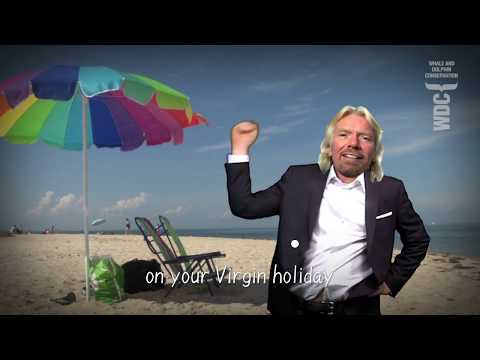 Ocean preservation and conservation, the protection of cetaceans – in the open ocean and in facilities – is consistent with the Virgin brand and Sir Richard Branson's personal values.

But, the release did say that Virgin would "explore the evolution of existing business models for cetaceans in tourism, as well as potential alternatives," giving hope that the company may soon join the plethora of others looking to alternatives to marine parks.

For many conservationists, this is a welcome step forward. Candace Crespi, campaign director for the Oceanic Preservation Society, told The Dodo:

We applaud Virgin on their commitment to being leaders in conservation. We're hopeful this is just the beginning of a transition from exploitation to education, and an opportunity to change the business model of marine parks for good.

Will Travers, CEO of the Born Free Foundation, mimicked her sentiment:

It is clear to me that maintaining the status quo is not an option and that the captive exploitation of cetaceans for the entertainment industry is a concept whose time is running out. How we all engage in protecting the world's threatened oceans, the wild species that inhabit them, the human communities that rely on them, how we educate and inspire future generations without captive exploitation and how we can provide compassionate care for individual dolphins, whales and orca that may need our help are challenges that I believe Born Free, Richard Branson's Virgin brand and many others can rise to and overcome.

Branson, who has been lauded by conservationists for denouncing inhumane dolphin drive hunts, seemed pleased with the meeting.

In attendance at the meeting were noted orca scientists Naomi Rose of the Animal Welfare Institute and Ingrid Visser of the Orca Research Trust, representatives from the Born Free Foundation, WDC and the World Cetacean Alliance. The landmark conference also included representatives from several marine parks including SeaWorld, the Georgia Aquarium, Loro Parque, Dolphin Cove, the Vancouver Aquarium and the Association of Zoos and Aquariums, among others.

We've reached out to Virgin Holidays for more details on the meeting.