It's hard to miss Rex, a boxer, and his best friend Smores, a guinea pig, when they're out and about together.

After all, Rex uses a wheelchair - and Smores's favorite place to be is cradled in a pink basket, attached to Rex's wheelchair.

"People always ask if [Smores] ever tries to jump out of her side cart," Holly Walthers, owner of Smores, Rex and the Vail Doggie Day Spa & Lodging in Avon, Colorado, told The Dodo. "She has never even tried. She absolutely adores him, and where he goes, she goes."

But before the best friends were bound at the hip, they both were leading very different lives. Rex was found as a stray in Orange County, California, with degenerative myelopathy (a type of spinal disease that eventually causes paralysis of a dog's back legs) in October 2015. He was 10 years old.

He lived in a shelter, where he ended up on the euthanasia list, and a group of California boxer lovers sprung into action to find a rescue that could care for a special needs dog.

That's when Walthers's rescue group, Leo Puppy Mill Survivor - named after her late dog Leo, who was rescued from a puppy mill, and passed away from cancer in 2014 - was contacted.

"We agreed to take him, and Sachi Animal Rescue pulled him [from the shelter] for us," Walthers said. "Once Rex got here, he was still able to use his rear legs, but did wobble some. We hiked a bunch from October 2015 through January 2016. He then was unable to hike anymore with the progression of his degenerative myelopathy."

Around that time, Rex was close with Tyson, another boxer who also had degenerative myelopathy. Sadly, Tyson passed away, leaving Rex without his best friend. 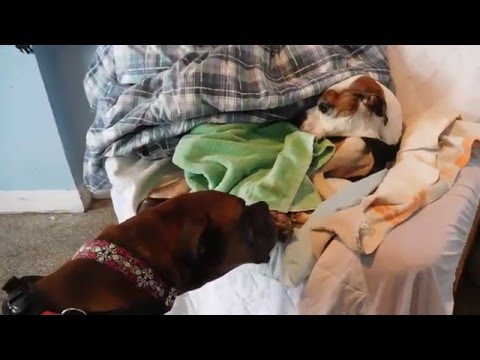 "So Rex was now unable to hike and had his wheels, but was a bit lonely with the death of Tyson," Walthers said.

"That same week Tyson passed, a gal I knew from a rescue reached out and asked if I would help out a guinea pig that was rescued from a bad situation. The guinea pig was safe at her house, but getting very little attention from her kids - she wanted a better life for Smores," she said.

Walthers agreed to take in Smores. The guinea pig was dropped off and immediately became attached to Rex, who craved companionship just as much as she did - the two have been inseparable since.

"Rex will sit in his chair in the office at Vail Doggie Day Spa and she is right there with him," Walthers said. "We have a smaller cage set up next to his chair so she can go in there if other dogs come in the office. We would trust very few dogs with Smores."

When Smores isn't relaxing in the office by Rex's side, she's outdoors with him in her cart - a constant sidekick and copilot.

"You can really see how much they love each other," Walthers said.

Watch Rex and Smores go on one of their adorable daily walks together below: