Starving Dog Has Incredible Transformation After A Little Love

When Perry the dog was first found on the streets, he was too weak to even find food. But thanks to the patient care of his rescuers, he underwent a stunning transformation.

Perry was rescued from the brink of death by Animal Aid Unlimited after he was found living on the streets of India. Photos show just how far gone this gentle dog was - completely covered in mange, he stares soulfully into the camera in one picture, his hairless body covered in scabs and open, bleeding wounds. In other photos, he curls his head into his emaciated body, seemingly hiding from the world.

Perry is one of the thousands of dogs who call the streets of India home. As they have no owners, when they get sick they have no one to care for them - and that's where Animal Aid Unlimited steps in.

After rescuers found him, they rushed him into medical care. He was hooked up to an IV, and received medicine for his painful skin condition. A brief clip taken midway through his treatment shows some improvement, but the little dog is clearly still traumatized by his long ordeal. He curls up on his blanket as one of his carers strokes his ears and holds his bandaged paw.

Rescue dogs like Perry can take months to recover, both physically and emotionally. But after weeks of medicine, food and patient love, this poor pup looks like an entirely different dog. Video of him taken more recently shows a happy, lanky dog running straight at the camera, his boldness and exuberance miles away from his cowering posture when he was first found.

In another clip, he can be seen running up to one of the women who cared for him and burying himself in her arms, clearly relishing in the attention and the happy cuddles.

Like many of Animal Aid Unlimited's dogs, Perry will likely be returned to the street where he was found once he has healed - only dogs who are permanently handicapped stay with the rescue. Claire Abrams, co-founder of the rescue group, told The Dodo last month that it's nearly impossible to adopt animals out in the area of India where the rescue is located, and that the dogs usually do fine once they return home, though she acknowledged that it's difficult for people coming from places like the U.S. to understand.

"The concept of returning dogs back to the street is very hard for people to grasp who haven't been to India, and we understand that to some it just makes no sense," Abrams explained. "But you kind of have to think of it as you would of wildlife rescue and release. The dogs are well adapted to the street and are not afraid of traffic, large crowds or loud noises. The dog's aren't cuddled and kept indoors as pets, but they also aren't abused, shot, or killed for meat or anything remotely of that nature."

She added that the group, which saves hundreds of animals every year, keeps in touch with locals to monitor the dogs after they're returned home, and that most of the street dogs fare far better than poor Perry.

"'Live and let live' is the way of life here as far as the community relates to animals and of course the rescues we show are the worst of the worst cases in the entire city, not the norm by any means," she added. "There are thousands of animals who live on the street who are totally healthy and happy. The ones who are not healthy and happy are the ones we rescue and who then have every chance thereafter of being healthy up in to old age."

And while India's street dogs might lead a very different life than what we're used to for our pets, at the end of the day they just need someone to look out for them - and fortunately, they have people like the team at Animal Aid Unlimited. And if Perry's recent photos are any indication, this transformed pup is well on his way to a happy, healthy life. 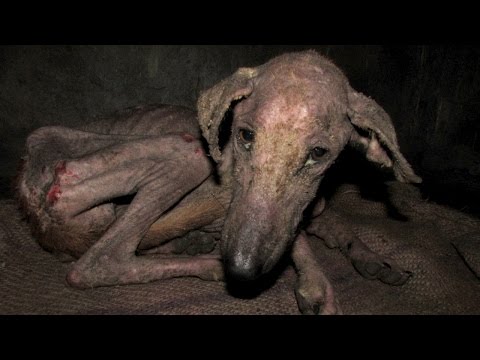