He Was 'Born Into Hell' But Now He Can't Stop Smiling

This is the face of Ra, one of six little lambs who would not be alive today if it weren't for human kindness.

And the joy of the newly freed beings - plucked from a terrible fate - is truly contagious.

In November 2015, the people at Mino Valley Farm Sanctuary in Spain learned about a group of newborn goats and lambs who were slated for slaughter at a nearby farm. The farmer, who had swiftly separated them from their mothers, planned to kill the excess baby animals for dog food.

Baby animals at the farm before the rescueMino Valley Farm Sanctuary

But Mino Valley Farm Sanctuary offered to take 15 goats and sheep off the farmer's hands. "We need to act now if we are going to rescue them," the sanctuary wrote in an email in November.

They acted fast and rescued 15 babies. The goats were soon taken to another sanctuary, while the seven lucky lambs began to get acquainted with their new forever home at Mino Valley.

They were given names: Ra, Bambi, Coque, Ismael, Drewsy, Feli and Pippin.

And they met their new family - the other rescued animals at the sanctuary.

"These babies have been born into hell, separated from their mothers from birth and locked up in these tiny prisons where they can barely move," the sanctuary wrote just after the rescue.

"They were living in the most horrific conditions and most of them were so sick that they were fighting to stay alive."

Sadly, Bambi succumbed to her illness and passed away. But Ra, Coque, Ismael, Drewsy, Feli and Pippin have come quite a long way since their meager beginnings.

They joined over a hundred other animals at the sanctuary, similarly plucked at the last moments from painful and sad fates. Now they're settling into their real lives.

Finally, the babies could learn what love feels like. 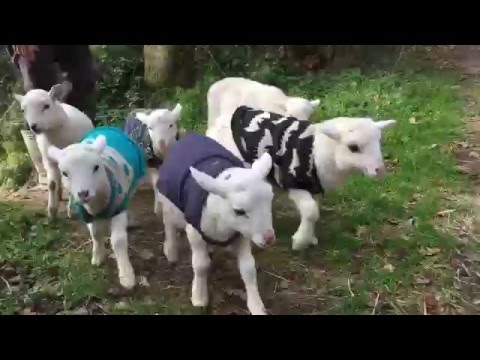