Goat With Brain Damage Finally Gets To Stand On His Own

Benedict was just one of over 100 animals carried to safety after rescuers discovered them in a living nightmare: a neglectful backyard butcher's farm in New York's Hudson Valley. The animals there were sick, starving and stinking of the noxious ammonia that plagued their filthy pens.

It's a miracle Benedict even made it out alive.

Ultimately, Benedict survived - though his dire beginnings stay with him to this day.

Benedict "has lived with ongoing neurological issues that make it more difficult for him to get around than it is for the average goat," Farm Sanctuary, the rescue organization that has given Benedict a forever home at its New York location, wrote on Facebook.

When he was first rescued, he was so emaciated and weak that he collapsed. And rescuers found that he couldn't hold himself up on his back legs.

He was able to gain some strength, but he still needed help. So, because rescuers were determined to give him a happy life, they provided him with wheels.

"[W]e thought we might be able to make things easier for him with the aid of a wheeled cart, and this week he got to try it out for the first time," the sanctuary wrote. 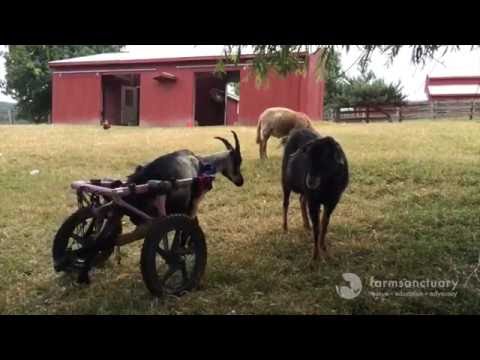 While he's still getting used to it, he's already made amazing progress, according to the sanctuary.

"There are many possible explanations for his mobility issues, including paralysis caused by caprine arthritis encephalitis (CAE), meningeal worm, spinal trauma or another unknown issue," according to the sanctuary. "He also has a fancy splint and hours of physical therapy to ensure he continues to build muscle as his leg heals."

Today, the people who care for him are continuing to help him build his strength.

One thing is clear: "His challenges," Farm Sanctuary observed, "haven't stopped him from playing and loving life."

To help support Benedict and Farm Sanctuary's other rescued animals you can make a donation here: