When a nest of baby crows fell through a tree in a family's backyard, they did everything they could to put them back safely, but it just wasn't possible. They could have left the crows to die ... but instead, they saved their lives.

The family quickly brought the orphaned baby crows to a veterinarian named Kristy, who decided that she and her family would raise them until they were ready and strong enough to be released back into the wild.

The babies needed to be fed every 2 to 3 hours, but Kristy's family was up for the challenge. "It was like trying to feed quadruplets," they wrote in a video about the birds. The crows were eventually named Baby Fred, Russell Crow, Adventure Fred and Crow Magnon.

Crows are very smart and capable of some basic speech, which is why some of them were given the name Fred, as the family thought that might be easy to say. In the end, the crows did learn to talk ... but completely by accident.

The family was so often saying "hello" to crow siblings - and eventually, they started saying it back.

In a way, it might have been the crows saying thank you to the humans who saved their lives, because they didn't know any other way.

The family knew that the crows would need survival skills to make it in the wild, and so they taught them how to hunt for worms and berries.

As they got older, they became more mischievous - they ate all the berries in a neighbor's yard, and broke another's satellite dish. They were getting more and more independent, and eventually, it was time to say goodbye.

The crows were accepted by a family of wild crows, and now fly south with them every winter ... but they're not gone for good.

Every year, at least two of the birds return to see Kristy and her family, and they still know how to say hello.

Without their human family, the crows never would have survived to be the quirky, happy birds they are today, and their visits are just a small way of showing how eternally thankful they really are.

Check out the full video of this incredible rescue story below: 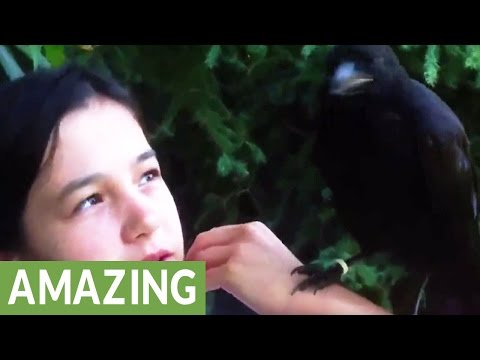