Rat Will Let NOTHING Get Between Her And Her Cat

This unlikely cat and rat pairing breaks all the stereotypes.

This unlikely cat and rat pairing broke all the stereotypes - and they managed to find an amazing friendship in the process.

Maggie Szpot and her family found Ranj, an orange tabby, when he was just a stray kitten in Cedarburg, Wisconsin. Though Szpot had pet rats while Ranj was growing up, when she brought home two new rats, Peanut and her sister Mocha, she was worried that his that his hunting streak would come out, she told The Dodo.

She couldn't have been more wrong.

"Peanut first met Ranj when [Peanut] was still a baby," Szpot said. "I had brought Peanut and her sister out of their cage to play, and I put them in a fenced area for them to run around in, and Ranj actually jumped inside to get a closer look. He is always curious of new things ... they quickly became good friends and Peanut followed Ranj around everywhere."

Mocha, on the other hand, never quite warmed up to Ranj - but one video shows just how inseparable Peanut and the orange cat were. In the short clip, Peanut just can't help herself and climbs over Ranj nonstop. 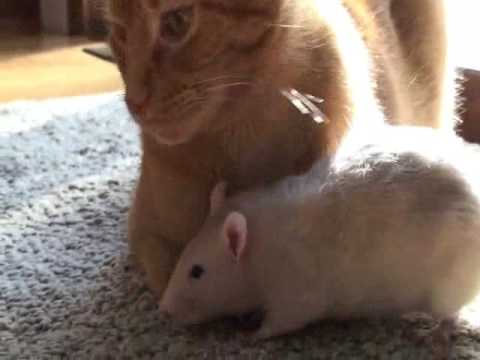 "If Ranj went to eat out of his food bowl, Peanut would come and eat with him," Szpot said. "I think those were the cutest moments, when Peanut was so determined to be with Ranj that she would overcome all kinds of obstacles to be with him."

Peanut also liked to snuggle in Ranj's warm fur and provide very loving licks (which the cat sometimes returned), Szpot said. Since Ranj is a cat, however, he did need to have alone time every so often.

"There were times when Peanut invaded Ranj's personal space too much and he'd leave or hop onto anything off the ground to get away from her," Szpot explained. "Sometimes Peanut would literally crawl all over Ranj, and he didn't enjoy that too much. She never quite understood the concept of personal space, but Ranj was good at tolerating her antics!"

Even when those antics included hugging ...

Szpot said that Ranj seemed to miss his best friend, and all the entertainment she brought with her, after her death.

But don't fret - these days, he isn't lonely. Ranj, who is turning 10 later this year, has a new feline friend to keep him company, along with Szpot's two birds.

... and Ranj seems to be carrying on well with new addition to the family.

Although he'll never have another friend quite as special as Peanut.

If you're interested in following the continued adventurous of Ranj and his animal friends, you can catch them on Facebook and YouTube. Want to adopt a Ranj or Peanut of your own? Get started at Adopt-a-Pet.com.